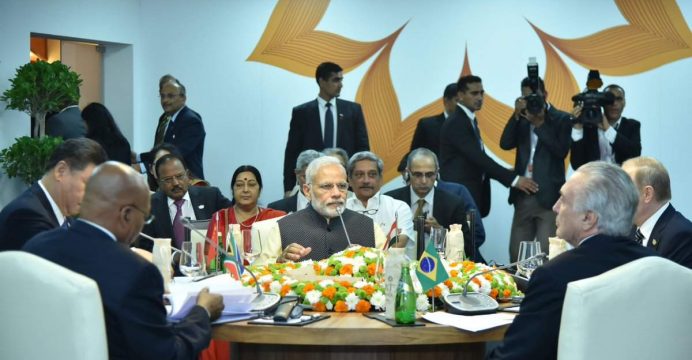 Indian Prime Minister Narendra Modi branded Pakistan a “mother-ship of terrorism” at a summit of the BRICS nations on Sunday, testing the cohesion of a group whose heavyweight member China is a close ally of India’s arch-rival.

Modi’s remarks to a meeting of leaders from the BRICS – which include Brazil, Russia, China and South Africa – escalated his diplomatic drive to isolate Pakistan, which India accuses of sponsoring cross-border terrorism.

Tensions between the nuclear-armed neighbors have been running high since a Sept. 18 attack on an army base in Kashmir, near the disputed frontier with Pakistan, killed 19 Indian soldiers in the worst such assault in 14 years.

India later said it had carried out retaliatory “surgical strikes” across the de facto border that inflicted significant casualties. Pakistan denied any role in the attack on the Uri army base, and said the Indian operation had not even happened, dismissing it as typical cross-border firing.

“In our own region, terrorism poses a grave threat to peace, security and development,” Modi said in remarks to BRICS leaders who met at a resort hotel in the western state of Goa.

“Tragically, the mother-ship of terrorism is a country in India’s neighborhood,” the 66-year-old prime minister said, without directly naming Pakistan, in a series of tweets of his remarks issued by the foreign ministry.

Pakistan accused Modi of misleading his summit partners and of seeking to conceal what it alleged was India’s own brutality in the part of Kashmir that it rules, where dozens have died since separatist protests broke out in July.

“The people of Indian Occupied Kashmir are being subjected to genocide by India for demanding their fundamental right to self determination,” said Sartaj Aziz, foreign policy adviser to Prime Minister Nawaz Sharif.

Modi’s hostile comments were not reflected in the closing summit statement he made to reporters, but still made it possible for him to present himself at home as being tough on national security.

“Modi is aware that such language wouldn’t get the consensus necessary to make it into the final communique. Including it in his speech ensures it gets wide circulation anyway,” said South Asia expert Shashank Joshi.

The summit achievements were incremental, and included establishing an agricultural research institute and speeding up work on creating a joint credit ratings agency.

Also on Sunday’s program was an outreach session with leaders from a little-known group of countries from the Bay of Bengal region whose key attribute, from India’s point of view, is that Pakistan is not a member.

Modi’s hard line on Pakistan marks a departure from India’s tradition of strategic restraint, and New Delhi has won expressions of support from both the West and Russia over the army base attack.

Yet China, a longstanding ally of Pakistan that plans to build a $46 billion export corridor to the Arabian Sea coast, has been cautious in its comments.

Modi and President Xi Jinping held a bilateral meeting on Saturday evening and accounts of their conversation emerging from both sides pointed to clear differences of opinion.

In one remark reported by the state Xinhua news agency, Xi said that China and India should “support each other in participating in regional affairs and enhance cooperation within multilateral frameworks”.

The dispatch went on to refer to the South Asian Association for Regional Cooperation (SAARC). This grouping includes Pakistan, which was to have hosted a summit in November that collapsed after India and other members pulled out.

The final summit declaration repeated earlier condemnations of “terrorism in all its forms” and devoted several paragraphs to joint effort to fight terrorism. It did not, however, level any blame over the tensions between India and Pakistan.