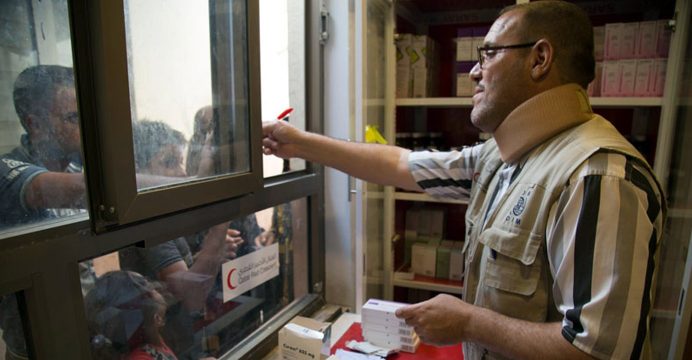 More than 100,000 Iraqis have been displaced since 16 June 2016 by military operations to retake ISIL-occupied areas in the Mosul corridor.

These recent displacements, in addition to the 3.3 million Iraqis who are already displaced across the country since January 2014, have exacerbated health needs for both internally displaced persons (IDPs) and host communities.

After fleeing their homes, many displaced Iraqis undertake demanding journeys, walking for hours or days, with varying degrees of immediate medical needs after having lived in ISIL-occupied areas where there is limited access to health services.

Since June 2016, more than 18,000 Iraqis have arrived to camps in Makhmour district in the south of Erbil governorate. The population of the Debaga IDP camp in Makhmour has rapidly increased in recent months to more than 37,000 individuals.

In order to support the health response in Debaga, IOM and the Qatar Red Crescent Society (QRCS), are jointly operating the health clinic in Debaga Camp, in coordination with the Erbil and Ninewa Directorate of Health, and the Health Cluster in Iraq. Opened on 1 June, the Debaga primary health care camp clinic is open 24 hours per day, seven days per week, and provides on average of 2,500 consultations per week to vulnerable IDPs.

Since early June the clinic has provided more than 35,000 health consultations to displaced Iraqis. The most common health problems encountered include upper respiratory infections, urinary tract infections, diarrhoea, skin diseases, hypertension and diabetes. More than 500 patients needing specialized care have been transferred to hospitals in Kirkuk and Erbil, many by ambulance.

The manager of the clinic represents the Directorate of Health of Erbil Governorate, which works in cooperation with the Directorate of Health of Ninewa governorate to jointly manage and supervise health services in Debaga. Other health partners operating in Debaga camp to provide specialized services include UNFPA, UNICEF, MSF, Malteser, WAHA and the Emirates Red Crescent, which was responsible for construction of the Debaga health clinic building.

To consolidate its partnership and with a view to enhance and strengthen cooperation for emergency health assistance provision to the crisis-affected populations in Iraq QRCS and IOM signed a memorandum of understanding (MoU) yesterday. The MoU was signed by QRCS Executive Manager General Secretariat Fahad M. S. Al Naimi, represented by Ahmed Al Qahtani, Head of QRCS Delegation, and by IOM Iraq Chief of Mission Thomas Lothar Weiss.

The MoU includes support of the Ministries of Health of the Government of Iraq and the Kurdistan Regional Government, to strengthen the operational and technical capacities of local health services, and to provide comprehensive health care to vulnerable groups, including IDPs, and host communities.

Head of QRCS Delegation Ahmed Al Qahtani said: “We consider partnerships to be among the most important strategies in our work. Emergency Mosul response operations will require concerted humanitarian efforts. We look forward to further collaboration with IOM Iraq in heath, shelter and WASH to provide assistance to displaced Iraqis.”

IOM Iraq Chief of Mission Thomas Lothar Weiss said: “We are pleased to provide life-saving health services in cooperation with the Qatar Red Crescent Society, to assist displaced Iraqis during this time of crisis. Responding to massive health and emergency needs requires cooperation from all humanitarian partners, and even greater commitments as displacement continues.”