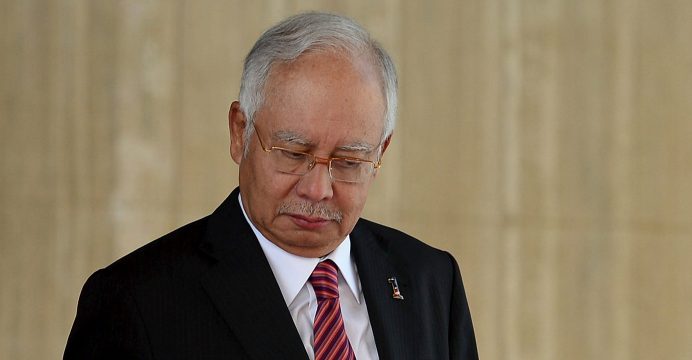 Malaysia’s leading political protest group announced plans on Wednesday for a seven-week roadshow capped by a November 19 rally in the capital to demand the scandal-tainted prime minister’s resignation.

Najib is clinging to power despite increasingly damaging allegations that he took part in the alleged looting of billions in state funds.

“We cannot have a prime minister who steals money from the rakyat (people). That cannot happen in this country,” the coalition’s chair Maria Chin Abdullah told reporters.

The independent alliance of NGOs and civil-society groups, commonly known as “Bersih”, the Malay word for “clean”, has staged four major demonstrations since 2007 to demand electoral and government reforms.

Rallies in 2011 and 2012 ended with police employing tear gas and water cannon against demonstrators. Bersih accuses Malaysia’s government, in power since independence in 1957,of systematic corruption, election abuses, and repressing dissent.

The US Justice Department filed lawsuits in the United States in July alleging a massive international conspiracy by Najib relatives and associates to steal billions from Malaysian state investment fund 1MDB.

US authorities moved to seize assets including real estate in Beverly Hills, New York and London, artworks by Monet and Van Gogh, a Bombardier jet,and corporate ownership stakes which they allege were purchased with stolen 1MDB money.

The US suits also accused an unnamed “Malaysian Official 1” with diverting huge sums. A Malaysian government minister has since acknowledged that official was Najib. Najib, 63, and 1MDB have repeatedly denied wrongdoing.

The prime minister has fended off mounting calls to come clean. Last year he purged his government of critics and shut down domestic investigations.

Political opponents accuse him of using repressive laws to further pressure critics and stifle scrutiny of the scandal. In August 2015, Bersih drew tens of thousands to peaceful demonstrations in Kuala Lumpur and other locations to demand Najib’s removal over the then-emerging scandal.

Such calls have so far had little effect on Najib, who has consolidated his power. Bersih officials said Wednesday the nationwide roadshow was aimed at spreading the word on 1MDB in rural areas where support for the ruling Barisan Nasional coalition remains solid.