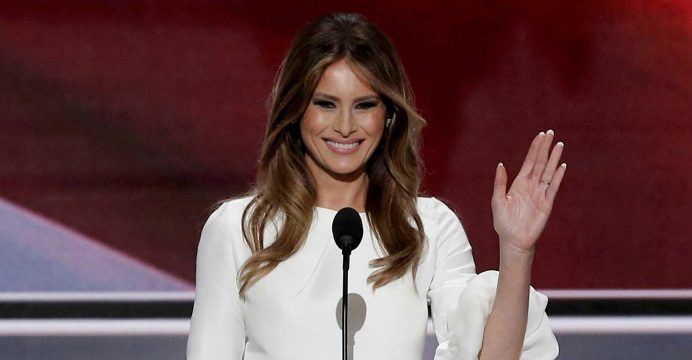 Melania Trump, the wife of US Republican presidential candidate Donald Trump, on Thursday, sued two media outlets that alleged she was an escort in the 1990s, reports BSS.

The suit — filed in state circuit court for Montgomery County, Maryland and acquired by reporters — is against Mail Media, Inc. which publishes the Daily Mail Online, and Webster G. Tarpley, who publishes a blog. Melania Trump, an ex-model of Slovenian origin, was seeking damages to the tune of $150 million.

Republican US presidential nominee Donald Trump stands with (from left) his son Eric, wife Melania and son Barron at the conclusion of the Republican National Convention in Cleveland

“These defendants made several statements about Mrs. Trump that are 100 percent false and tremendously damaging to her personal and professional reputation,” said her attorney Charles Harder.

“Defendants broadcast their lies to millions of people throughout the US and the world.”

“Defendants’ actions are so egregious, malicious and harmful to Mrs. Trump that her damages are estimated at $150 million dollars.”

Melania Trump is 24 years younger than her billionaire husband. She is Donald Trump’s third wife and the mother of their young son Barron. Harder specializes in cases that involve privacy protection and defamation.

He represented former wrestler Hulk Hogan in his successful lawsuit against Gawker Media, which resulted in a $140 million jury award against the entertainment website for releasing a sex tape featuring Hogan and a friend’s wife. The decision caused Gawker to shutter its flagship website after the court order drove the company to bankruptcy.