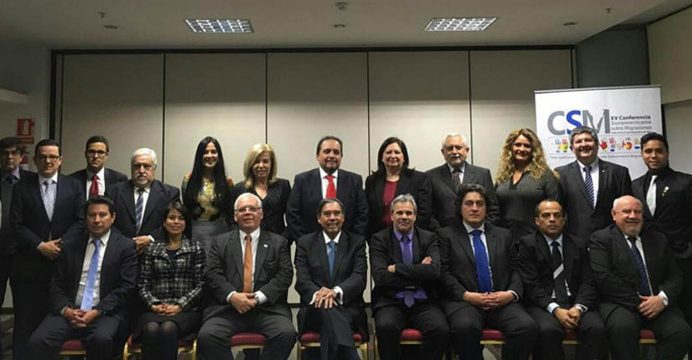 Representatives of South American governments met this week in Montevideo, Uruguay, in preparation for the XVI South American Conference on Migration (SCM) to be held 3-4 November in Paraguay’s capital, Asunción.

Delegates from Argentina, Brazil, Colombia, Chile, Ecuador, Paraguay, Peru, Uruguay and Venezuela attended the XI SCM Inter-sessional meeting. The event was chaired by a representative of the Chilean government as the Pro Tempore Presidency of the SCM, a delegate of the government of Uruguay as a host country, and supported by IOM as Technical Secretariat of the Conference.

Delegates discussed issues including progress on access to justice for migrants, border mobility and free circulation, migration and cities, and the link between migration, environment and climate change.

The SCM Pro Tempore Presidency through the General Director of Consular Affairs and Immigration Ambassador Carlos Appelgren presented the annual report, which included the international perception of the Conference, relations between SCM and other Regional Consultative Processes (RCP) on migration, and relations with other fora on migration at global and regional level.

It also addressed a study of the impact of the MERCOSUR Residence Agreement carried out by IOM and aspects of the UN Summit for Refugees and Migrants that will take place 19 September 2016 at the UN in New York. At the Summit UN Secretary-General Ban Ki Moon and IOM Director General William Lacy Swing will sign an agreement establishing IOM as a “Related Organization” of the UN. This was welcomed by SCM representatives.

The meeting also saw the transfer of the SCM Pro-Tempore Presidency by Ambassador Appelgren to the Minister Julio César Livieres, Paraguay’s General Director of Consular Affairs.

The SCM, first held in Lima in 1999, is the main regional process for non-binding government consultation and dialogue in the migration field in South America.