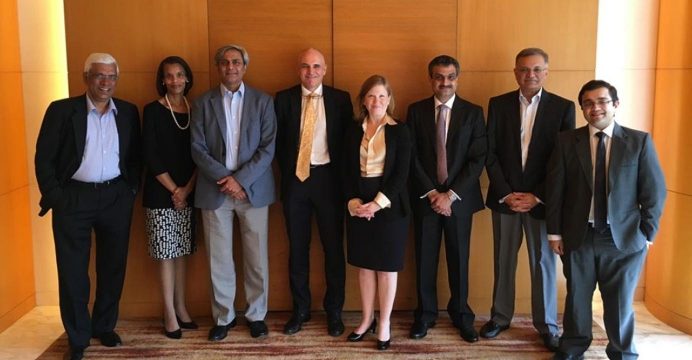 $150 million approved to support Microfinance and Sanitation in India

ADB’s investment will be used to help Janalakshmi grow its microfinance and SME loan portfolios. At least 50% of the proceeds of ADB’s funding will be deployed by Janalakshmi in less developed states in India and a large proportion will be provided to women.

“ADB is very pleased to support Janalakshmi’s growth as it transitions into a pan-India small finance bank and looks to diversify and increase the tenor of its liabilities, while it builds its deposit franchise,” said Michael Barrow, Director General of ADB’s Private Sector Operations Department. “In doing so, ADB will support Janalakshmi as it furthers its mandate of financial inclusion, in line with Government of India programs.”

Mr. Barrow recently met with Janalakshmi’s founder, Mr. Ramesh Ramanathan, and other members of senior management, to discuss the bank’s long-term strategy to develop a scalable platform to service the financial needs of the poor by offering the complete value chain of financial products and services. Janalakshmi was awarded an in-principle small finance bank license by the Reserve Bank of India in September 2015.

The proposed transaction also seeks to support the development and deployment of sanitation loans that complement the government’s sanitation initiatives. More than half of Indian households do not have a toilet. In addition to the spread of disease and various health issues that result from mismanagement of waste, women are particularly affected by insufficient household sanitation. ADB’s funding, in combination with a technical assistance grant, will help to develop and deploy sanitation loan prototypes that can be used by Janalakshmi, as well as other financial institutions throughout India, as a complement to the government’s sanitation initiatives to provide safe, clean, and secure toilet facilities.

“Janalakshmi is delighted to welcome ADB as a new lender into our borrowing program. This is a strategic relationship with opportunities to collaborate in different ways as we look to drive our financial inclusion agenda,” said Mr. Ramanathan.