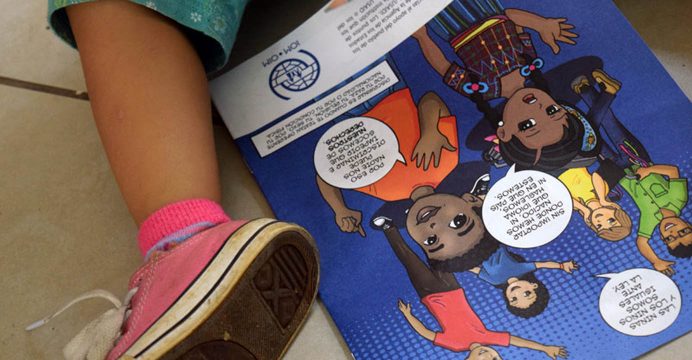 IOM and the Association of Municipalities of Honduras (AMHON) have signed this week a letter of understanding to strengthen the capacities of local Honduran actors in the care and reintegration of migrant children and adolescents returned to the municipalities of Catacamas, El Progreso and San Pedro Sula.

The cooperation agreement, in recognition of the Convention on the Rights of the Child, was signed by the Executive Chairman of the AMHON, Nery Cerrato, and IOM’s Chief of Mission to El Salvador, Guatemala and Honduras, Jorge Peraza Breedy.

The signatories also launched a Psychosocial Support Guide for Migrant Children and Adolescents. The guide was developed with the support of local protection clusters, including mayors, civil society organizations and the Honduran Department for Children, Youth and Family (DINAF).

It outlines best practices in the strengthening of identification and referral techniques for mobile populations in vulnerable situations requiring specialized comprehensive care.

Through this partnership, IOM will also provide technical support to institutional key players, in the prioritized municipalities, to strengthen their capacities to provide care to returned children and adolescents and their families.

IOM will also provide 400 school kits and will train community leaders on issues such as prevention of irregular migration and the rights of migrant populations.

The agreement is part of a project: Strengthening the Capacities of Government Assistance after the Arrival of Unaccompanied Children and Adolescents Returning to El Salvador and Honduras, supported by the IOM Development Fund.

IOM will also focus its efforts on trainings and promoting the reintegration process of returned migrant children and adolescents with special protection needs. These training will be aimed at officials of the Honduran government.

According to Honduras’ National Information Social Sector Centre (CENISS), in the first half of 2016, over 4,300 children and teenagers returned to Honduras from Mexico and the United States. Of these, 63 percent were aged 13 to 17 years. The CENISS also points to San Pedro Sula as the municipality with the highest rate of returned migrant children in the country.