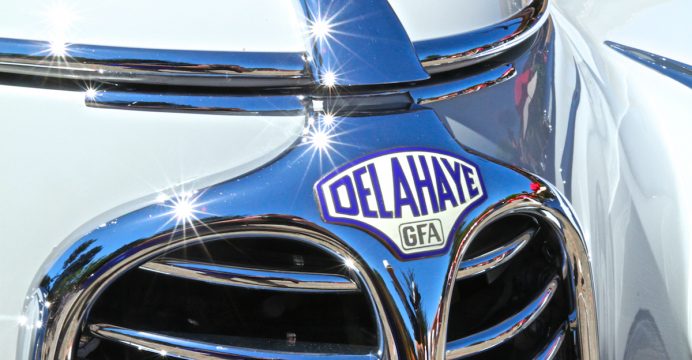 “We call on God to bless all these cars and the people who bring them here,” intones the Most Rev. Richard Garcia of the Catholic diocese of Monterey, Calif. “He has blessed us to create great and beautiful work.”

Then Bishop Garcia and fellow prelates spread out to sprinkle the 52 classic cars on display in the courtyard of the Carmel Mission, the iconic church where Father Junipero Serra, who was canonized a saint last year, is buried,reports Reuters.

The Blessing of the Automobiles, formally called the Carmel Mission Classic, is perhaps the most unusual event during Monterey Car Week. It’s nine days (a week being no longer enough) of parades, parties, shows, races and lectures that culminates in Sunday’s Concours d’Elegance classic car show on the 18th fairway at the Pebble Beach golf course. The course is about as sacred to golfers as Father Serra’s grave is to Catholics.

The Blessing, sponsored by the Carmel Mission’s Knights of Columbus Chapter, is a fairly new car-week event — just four years old. It’s the brainchild of Frank DiPaola, now chairman of the event. He saw the need, he explains, to “combine the passion of fine automobiles with the passion of the soul.”

Adds Rico Tesio, the Carmel Mission’s Deputy Grand Knight: “We are men of faith. But we are also men of cars.”

The Blessing draws only about 1,100 people compared to the tens of thousands who flock to many of Car Week’s other events. There’s no official number for overall attendance during the nine days, but it’s so many people that some local residents take their own vacations during this time — outside of Monterey and Carmel — to avoid the invading hordes.

Tickets to the Blessing cost just $50 each, as opposed to $375 for tickets at the door to the Concours. The proceeds in both cases go to local charities. Blessing attendees sip local wine (there is lots of it produced nearby) and chow down spicy hot dogs and other fare. There was live music, including that hymn to the automobile, “Mustang Sally.”

“It’s a very special event because it’s so relaxed,” explained Dana Newquist of Santa Barbara, Calif., who was sporting a period-dress duster coat and displaying his 1926 Locomobile. (The car actually has a 1906 chassis and a body built two decades later, he explained.) “That’s why this event is blessed.”

Few, if any, of the cars at the Blessing will be shown at Sunday’s Pebble Beach Concours. But the group did include an eclectic range of collectible autos — among them a 1915 Ford Roadster pickup truck, a 1934 Packard, a 1959 Porsche Carrera, a 1968 Pontiac GTO and a 2005 Ford GT.

While looking at those and other cars, Blessing attendees eagerly swapped car stories (all truthful, one presumes, at an event like this) with each other. The camaraderie theme was invoked by Bishop Garcia, who said: “The Son of God came into the world to bring people together. Whatever brings us together also brings us closer to God.”