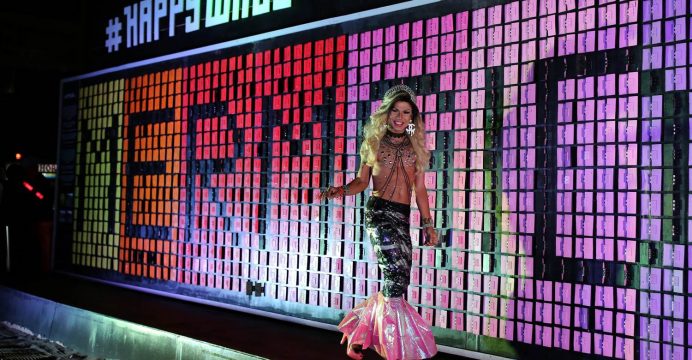 Mermaids make a splash at diversity celebration at the Rio Games

A gaggle of mermaids made a splash on the sandy shores of Rio de Janeiro’s Ipanema Beach on Saturday (August 14) night at a party celebrating diversity organized at the Danish Pavilion.

The record number of openly gay Olympic athletes has boosted the acceptance of Brazil’s lesbian, gay, bisexual and transgender (LGBT) community amid a backlash over same-sex marriages, according to people at the event.

With the largest total of openly gay athletes participating, 49 according to Outsports magazine in July and double the number of London in 2012, Rio 2016 has seen the first married gay couple competing and a lesbian marriage proposal at a medal ceremony, reports Reuters.

Brazil’s courts have recognized civil unions between homosexuals but its Congress has opposed the legalization of same-sex marriages.

The LGBT community hopes the high-profile example of Olympic athletes can help change attitudes in the country.

The Mermaid Festival brought together a slice of Rio’s LGBT community and the Danish delegation at the beach-front pavilion dubbed the Heart of Denmark. Unlike Brazil, Denmark is very open to same-sex marriage and sexual diversity.

Anders Garde Kongshaug, who helped create the idea for the festival, said it was a way for Denmark to connect to the local LGBT community using the image of The Little Mermaid from the popular fairy tale written by Danish writer Hans Christian Andersen.

Kongshaug told Reuters, Denmark, which was the first country to recognize registered partnerships for same-sex couples, has a long history of inclusiveness, something they wanted to share here in Rio during the 2016 Olympics.

“I think for Denmark, whatever is said, openness is still a very important thing. For Danish democracy, all voices need to be heard and we just want to keep on holding this human idea high. And we want to contribute now to the Olympics saying this is actually what we want to say, no matter what happens with the political situation, we believe in the human. They can be women they can you know… they like to be gay, they like to be lesbians, it’s fine. You know, we’re here as humans,” Kongshaug said.

The mermaid party was especially pertinent with the 2016 Rio Olympics having been dubbed the gayest Olympics ever given that more than 50 athletes and coaches competing here have identified as part of the LGBT community.

People attending the festival said having gay and lesbian athletes in the Olympics has provided a medium to put out a positive message for the community.

“I think it sends the message that we (LGBT persons) exist and we have a voice and we deserve a voice that isn’t denied in the day to day. When we take the bus, when we go to work, you know, go to University or not, you know, this voice can’t be denied and the mega event (Olympics) gives us this opportunity to have a bit of visibility,” said Aline Pedrotti who attended the party with her girlfriend, Juno Griz.

After winning the prize for best costume at the festival, Murilo Souza said having athletes as a face for the gay community, not just carnivalistas, would have positive effects throughout Brazil.

“Showing this on TV and other communication outlets also starts to make this a headline. Some people view it negatively, but other people start to see it as something positive because it starts to get visibility. Places where the discussion wouldn’t have come up, very traditional families where the issue is not spoken about at the table can now come up via sport which is a healthy outlet. So yeah, the LGBT community in Brazil is going to have another face besides Carnival. Now we have sport which is something healthy. It’s something constructive, something educational,” Souza said.

To top off a night of celebration and coming together, there was the “Best Mermaid at the 2016 Rio Olympics” catwalk competition which Souza won.