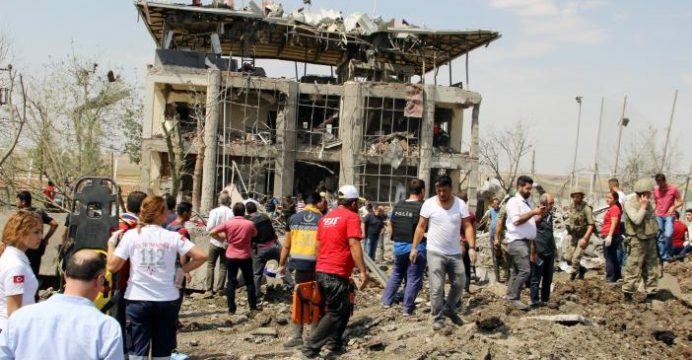 Four Turkish police officers and two civilians were killed on Monday in a car bombing outside the southeastern city of Diyarbakir blamed on Kurdistan Workers’ Party (PKK) rebels, the government said, reports BSS.

The blast hit a police traffic control post on the highway leading southeast from Diyarbakir to the city of Batman, killing the six victims, Deputy Prime Minister Numan Kurtulmus told reporters in Ankara.

The local governor’s office earlier said in a statement that 25 people were wounded including five police officers. One of those killed was a child. An initial toll had said three people were killed. 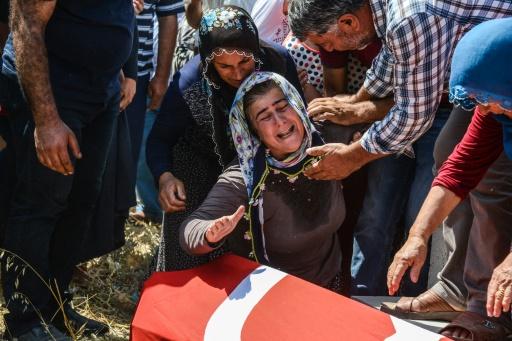 A reporter-photographer saw the bombing had turned the three-storey police building into tangled rubble with rescue workers searching the debris with diggers for corpses. Locals were also inspecting the massive trench where the ground had been blown out by the car bomb.

The latest bombing came after at least eight people, mostly civilians, were killed on Wednesday in two separate attacks blamed on PKK militants in Turkey’s southeast.

It also came on the day seen as marking the 32nd anniversary of the launch of the PKK’s armed rebellion by radical Kurdish nationalist Marxists led by their now jailed leader Abdullah Ocalan.

Hundreds of members of the Turkish security forces have been killed by the PKK in attacks since the collapse of a two-year ceasefire in July last year.

The government has responded with deadly military operations against the group in southeast Turkey as well as air raids on its strongholds in northern Iraq.

The PKK has kept up attacks after the July 15 failed coup that tried to oust President Recep Tayyip Erdogan from power, which authorities blamed on US-based preacher Fethullah Gulen.

The government has vowed there will be no let-up in the fight against the PKK even in the wake of the coup. The Turkish army’s hierarchy has been badly hit in the purge since the coup, with top generals accused of complicity in the plot.

There has been no suggestion that the PKK was behind the coup and Gulen is believed in the past to have vehemently opposed peace talks with the group.

But some officials have alleged the PKK has helped Gulen supporters flee the post-coup crackdown into northern Iraq or Europe, sometimes in exchange for information about the Turkish intelligence services.

Meanwhile, three soldiers serving on the Imrali prison island where Ocalan has been held since his capture in 1999 have also been detained as part of the investigation into the coup, the state-run Anadolu news agency said.

Over 40,000 people have been killed since the PKK first took up arms in 1984. It is proscribed as a terrorist group by Turkey, the European Union and the United States.

August 15 is usually seen as the anniversary of the start of the deadly campaign of violence by the PKK which began with twin attacks in southeast Turkey in 1984.