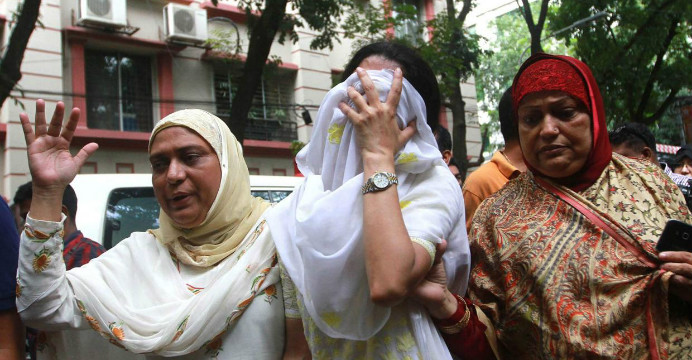 Bangladesh has declared two days of national mourning for those killed when Islamic militants stormed a cafe in the capital, Dhaka. Twenty hostages, most of them foreign, were killed in the attack. Two police officers also died and 30 were injured, reports BBC.

Bangladeshi commandos rescued 13 people after a 12-hour siege, killing six gunmen and arresting another. Nine Italians, seven Japanese, one US citizen and an Indian were among the dead. One Italian is unaccounted for.

Bangladesh’s home minister said on Sunday that the attackers were not from the so-called Islamic State group, but belonged to a local militant group, which has been banned for more than a decade. 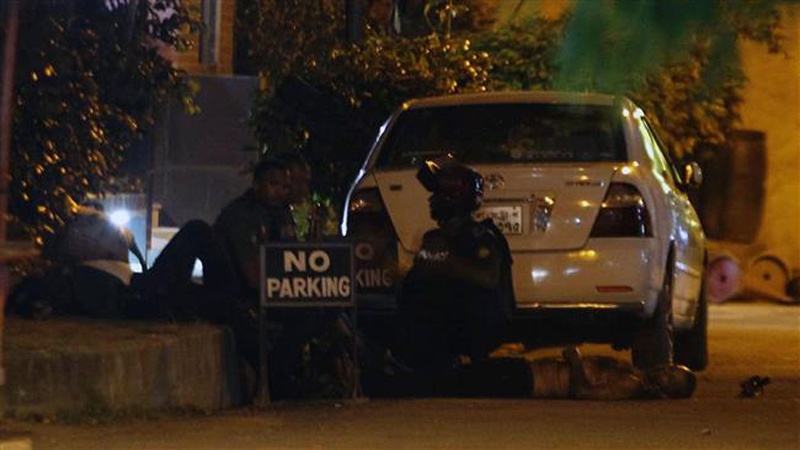 Police officers take cover as a man lies on the ground near the Holey Artisan Bakery restaurant during an attack by gunmen in Dhaka, Bangladesh, July 1, 2016

“They are members of the Jamaeytul Mujahdeen Bangladesh,” Asaduzzaman Khan told the AFP news agency. “They have no connections with the Islamic State.”

IS had earlier released photographs of the alleged attackers posing in front of a black IS flag. Meanwhile, fresh accounts from survivors have emerged. Argentine chef Diego Rossini told how the gunmen burst into the Holey Artisan Bakery on Friday evening with bombs and machine guns.

“I can’t still believe this happened,” he said.

“It was like a movie, they pointed their guns at me and I could hear shots passing by. I was very, very afraid.”

He said he escaped by running to the cafe terrace and jumping on to another building.

According to CNN, In a statement ISIS claimed responsibility, but Bangladeshi officials said the attack was carried out by homegrown militants and hinted towards a group called Jamaatul Mujahideen Bangladesh.

All the attackers in the deadly assault on a cafe in Dhaka were Bangladeshi citizens. Five were militants police had tried to arrest previously, Police Inspector General of Bangladesh Shahidul Hoque said.

The attack was the deadliest and boldest act of terror in a country that has become increasingly numb to ever-escalating violence by Islamist militants. Some guests and workers managed to escape.

Cafe worker Shumon Reza said he saw six to eight gunmen enter the bakery. He escaped as they came in.

“The guests were all lying on the ground under the chairs and tables,” Reza told Boishakhi TV. And we (the employees) escaped in whichever safe way we could. Some went to the roof, others went to other safe spots.”

Shortly after, Reza said, the attackers started throwing explosives, one after another.

“We thought it wasn’t safe anymore and jumped from the roof,” he said.

Early Saturday morning, military commandos moved in. By the end, 13 people had been rescued and 20 were dead, officials said.

Bangladeshi officials say ISIS is not present in their country, despite the group’s claim of responsibility. Bangladesh Information Minister Hasanul Haq Inu said the attack was carried out by homegrown militants.

Initially, a U.S. official told CNN it was more likely that al Qaeda in the Indian Subcontinent conducted this attack because the group had demonstrated a more capable presence in Dhaka through attacks over the past few months.

But after photos purportedly showing the inside of the cafe and dead hostages were posted on an ISIS-affiliated website, U.S. officials said they are now focused on ISIS as the perpetrator.

The photos were posted on Amaq while the siege was ongoing, with a claim that the extremely graphic images were of foreigners killed by terrorists in the attack.

The fact that the images were posted approximately 90 minutes before Bangladeshi forces stormed the restaurant suggest that several hostages had already been killed before the commandos moved in. While CNN can’t verify the authenticity of the photos, the images show wall murals, glossy tables with carved legs, white chairs and other items very similar to those seen on the cafe website.

These photos don’t prove that ISIS had operational control of the attack, but the website also displayed the photos and noms de guerre of five individuals, claiming they carried it out.

WHO ARE THE VICTIMS?

Two Bangladeshis named in national media as Faraaz Ayaaz Hossai, a student at Emory University in the US, and Ishrat Akhond.

US citizen Abinta Kabir, also a student at Emory University.

One Indian Tarishi Jain, 18, who was a student at the University of California, Berkeley.