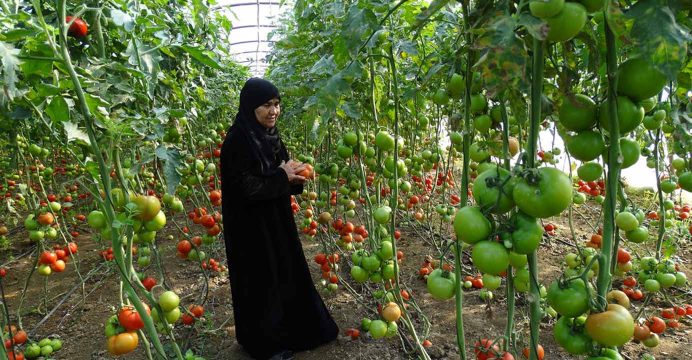 Syrian farmers in the country’s western coastal governorate of Tartous, formerly among the world’s top producers of tomatoes, have started their first tomato harvest of the year with support from the Food and Agriculture Organization of the United Nations (FAO) and the UN World Food Programme (WFP).

Before the conflict in Syria, Tartous farmers grew up to 1 million tons of tomatoes yearly for local consumption and export. However, many lost their farming capacity due to the crisis in Syria since 2011 that has forced over 9 million people into food insecurity.

FAO and WFP, in cooperation with the Ministry of Agriculture’s Directorate of Agriculture and Agrarian Reform, jointly launched a programme in early 2016 to restore agriculture-based livelihoods by rebuilding damaged greenhouses and providing tomato seeds and irrigation systems to the worst-affected farmers in Tartous governorate.
“This programme is rebuilding greenhouses as well as the resilience of thousands of Syrian farmers and displaced people who lost their sources of income,” said Abdirahman Meygag, WFP Syria Deputy Country Director. “It also has the added benefit of enabling, strengthening and protecting communities by improving their livelihoods and boosting the production of nutritious foods and people’s access to them.”

WFP is providing plastic sheeting to restore damaged green houses in addition to food rations containing staple food items, including lentils, rice and cooking oil, to help farmers and displaced families get through the lean season before the harvest is complete.

“This is a crisis within a crisis with a huge impact on the food and nutrition security of displaced people and their host communities. FAO has been working with stakeholders in order to enable the affected farmers to play their most important role of producing food. The next step will be to work on post-harvest of tomatoes produced by the farmers to increase farmers’ income and revenue for improved livelihoods,” said FAO’s Syria Deputy Representative, Adam Yao. “The farmers’ community benefiting from this programme has adapted because they can now grow their own food and they have transformed from the shock because they are now selling their harvest and relying on themselves.”

A severe winter storm in 2015 caused extensive damage to farmers’ crops and destroyed half of the greenhouses in the governorate resulting in a major deficit in agricultural production and the loss of thousands of farmers’ livelihoods. It also meant that displaced families working on farms were unable to find work.
The programme supports 15,000 people including food insecure farmers, internally displaced people mainly from Aleppo who rely on the agriculture sector to find work as well as the local community in Tartous governorate.

Across Syria, WFP provides life-saving food assistance every month to 4 million people affected by the crisis. Since 2011 FAO’s support in Syria in the sectors of food and livestock productions, training and capacity building reached more than 340,000 households to strengthen the food and nutrition security of more than 2 million people in Syria.