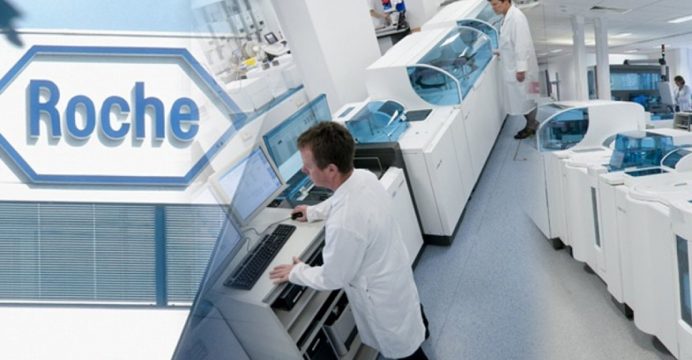 Roche (SIX: RO, ROG; OTCQX: RHHBY) announced  that the European Commission has approved Gazyvaro® (obinutuzumab) in combination with bendamustine chemotherapy followed by Gazyvaro maintenance in people with follicular lymphoma who did not respond or who progressed during or up to six months after treatment with MabThera® (rituximab) or a MabThera-containing regimen.

“Today’s approval is a significant milestone in the treatment of people with follicular lymphoma in Europe,” said Sandra Horning, MD, Chief Medical Officer and Head of Global Product Development. “For those who fail to achieve durable disease control with MabThera-based treatment, Gazyvaro plus bendamustine is an important new treatment option that has been shown to reduce the risk of disease progression or death by more than half.”

Every day, more than 50 people in Europe are diagnosed with follicular lymphoma, the most common type of indolent (slow-growing) non-Hodgkin lymphoma (NHL).1,2 During initial therapy, response rates to MabThera-based treatment, the current standard of care, are greater than 90 percent, but there is no cure and people will eventually relapse.3,4 The disease becomes more difficult to treat at each relapse, and if a patient does not respond or relapses during or within 6 months of MabThera -containing treatment, they will likely need a different treatment. These people often have a poor prognosis and few treatment options.5

With this approval, Gazyvaro is now approved in Europe to treat two common types of blood cancer. Gazyvaro was previously approved in combination with chlorambucil for people with previously untreated chronic lymphocytic leukaemia (CLL) and comorbidities that make them unsuitable for full-dose fludarabine based therapy. That approval was based on data from the pivotal CLL11 study, where the combination of Gazyva/Gazyvaro plus chlorambucil showed superior efficacy when compared head-to-head with MabThera/Rituxan plus chlorambucil and chlorambucil alone.

Gazyvaro is marketed as Gazyva outside of the EU and Switzerland. As announced in February this year, Gazyva received approval by the US Food and Drug Administration in combination with bendamustine followed by Gazyva alone as a treatment for people with follicular lymphoma who did not respond to a Rituxan-containing regimen, or whose follicular lymphoma returned after such treatment, based on the results of the GADOLIN study.