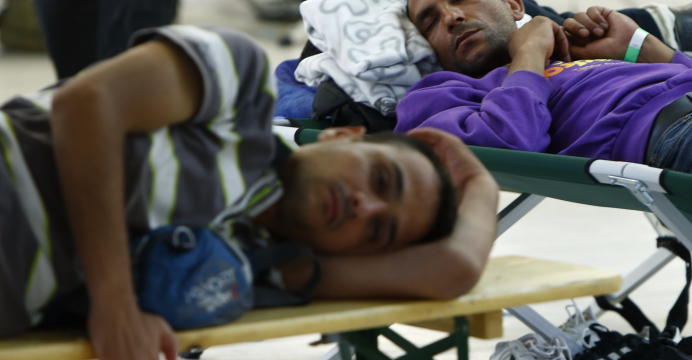 Palestine refugees, like people all over the world, are now living longer as a result of improved health services.

That’s the good news. The bad news is that sedentary lifestyles, obesity, unhealthy diets and smoking are also on the rise among refugees. According to a new audit by the United Nations Relief and Works Agency (UNRWA), more than 120,000 people in the Gaza Strip, Jordan, Lebanon, West Bank and Syria now have diabetes – and 90% of them are overweight or obese. Diabetes in this group, according to the audit, is increasing by an estimated 3-5% each year.
On 15 May, the WDF, UNRWA and Microclinic International launched a new effort to address the problem. The project, Middle East Regional Scale-up of Microclinic Program, aims to both improve diabetes prevention and care in UNRWA clinics, and set a regional standard for diabetes prevention and care among refugees in the Middle East and beyond.

The project is based on the idea that lifestyle behaviours spread via social networks. To encourage the spread of healthy behaviours, the project will add ‘microclinics’ to the diabetes infrastructure created by UNRWA in Jordan, Lebanon, the West Bank and Gaza.
“A ‘microclinic’ is not a small building, but a human network consisting of small groups of people who share access to education, technology, and social support as members work together to prevent and manage a deadly disease,” explains Dr. Daniel Zoughbie, Founder and Chief Executive Officer at Microclinic International.
The project will be integrated into existing UNRWA health centres, building on current diabetes prevention and care services. It will teach nearly 1000 nurses about ‘the four M’s: meals, movement, monitoring and medication. The nurses will then pass this information on to their patients, and encourage them to spread it further by holding meetings for family and friends.
The project aims to reach 1 million Palestinian refugees with its messages about diabetes and healthy living. It also aims to provide care to 112,000 refugees with diabetes who receive or are eligible for UNRWA health services.
“At the end of this partnership, we expect that all diabetic patients and their social networks will have enough health education to improve their own lives, and the lives of those close to them,” Dr. Zoughbie says.

The new project builds on the WDF-UNRWA partnership project Scaling up Diabetes Care for Palestine Refugees in the Near East, which built diabetes care capacity in refugee camps and conducted impact measurement afterwards, explains Jakob Sloth Yigen, WDF Programme Manager.
“Scaling up Diabetes Care was a strong, well-run project and it produced several recommendations, such as better equipment for testing long-term blood sugar levels and more focus on lifestyle interventions,” he says.
“Now we will follow up on these recommendations – and hopefully provide a model for diabetes care for refugees throughout the Middle East, and other refugees worldwide.”
WDF has also supported Microclinic International through two other projects, which developed the microclinic model for diabetes care in Jordan, and were carried out in partnership with the Royal Health Awareness Society and the Ministry of Health. Those projects have led to the current use of the microclinic model at a national level throughout the Kingdom of Jordan.
The WDF has supported projects to improve diabetes care for Palestinian refugees since 2003, working with partners including DanChurchAid, Augusta Victoria Hospital, UNRWA and now Microclinic International. The Foundation currently has five active and five completed projects in the region.