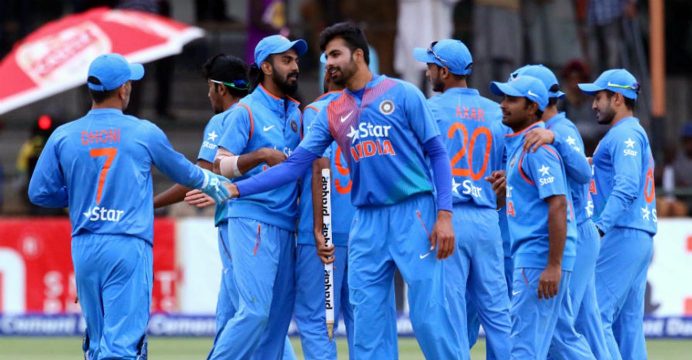 Former ICC World Twenty20 champion India missed a chance to wrest back the top position on the MRF Tyres ICC T20I Team Rankings despite defeating Zimbabwe by 2-1 in the three-match series in Harare on Wednesday.

India had started the series fraction of a point behind New Zealand and needed to win the series 3-0 to perch itself at the top of the table.

However, after Zimbabwe pulled off a thrilling two-run victory in the opening match of the series on Saturday, India kissed good-bye to its chances of reclaiming the number-one position which it had surrendered to New Zealand following the annual update on 4 May.

In contrast, Zimbabwe has lifted from 58 points to 62 after gaining four points despite losing the series. This is because India had entered the series leading 12th ranked Zimbabwe by 66 points. And because the rankings are weighted to reflect this difference, India’s failure to comfortably win the matches have resulted in it dropping points and Zimbabwe earning points.

Meanwhile, in the MRF Tyres ICC T20I Player Rankings, a number of India’s rising stars have made impressive gains in the latest rankings.

In the MRF Tyres ICC Rankings for T20I Bowlers, Jasprit Bumrah has achieved a career-best rankings. The right-arm 22-year-old from Ahmedabad has vaulted six places to second position after claiming five wickets in the series.

This rise means Bumrah has become India’s highest ranked bowler in the shortest format of the game after Ravichandran Ashwin has slipped four places to seventh following his decision to miss the series.

Bumrah’s team-mate Barinder Sran, who finished the series as the most successful bowler with six wickets, has broken into the rankings in 225th position.

In the MRF Tyres ICC Rankings for T20I Batsmen, Kedar Jadhav has made a huge jump of 181 places to 106th after he finished as the third leading run-getter with 77 runs that included a match-winning 42-ball 58 that helped India to set-up a winning score.

Mandeep Singh and Lokesh Rahul have returned to the rankings in 100th and 102nd positions respectively, while other notable movers are Manish Pandey in 152nd (up by 119 places) and Ambati Rayudu 217th (up by 133 places).

India’s Virat Kohli is the number-one ranked T20I batsman. He is followed by Aaron Finch of Australia and Martin Guptill of New Zealand.