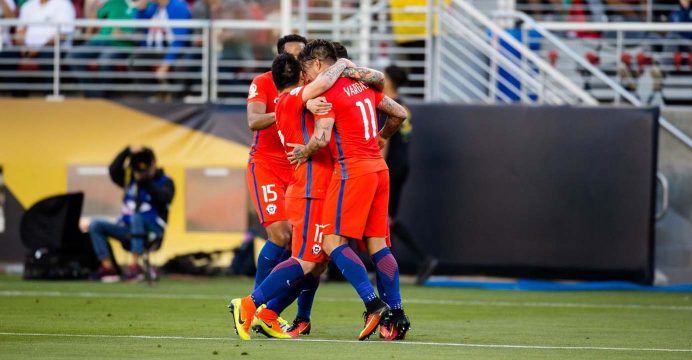 Chile is back in the Copa America Final with a chance to defend their tournament championship after Wednesday night’s 2-0 Semifinal win against Colombia at rain-soaked Soldier Field in Chicago.

Chile’s offense picked up where it left off in last Saturday’s 7-0 Quarterfinal defeat of Mexico. La Roja had not beaten Colombia in more than five years, but two quick goals early in the first half doomed Los Cafeteros despite a long weather delay at halftime. 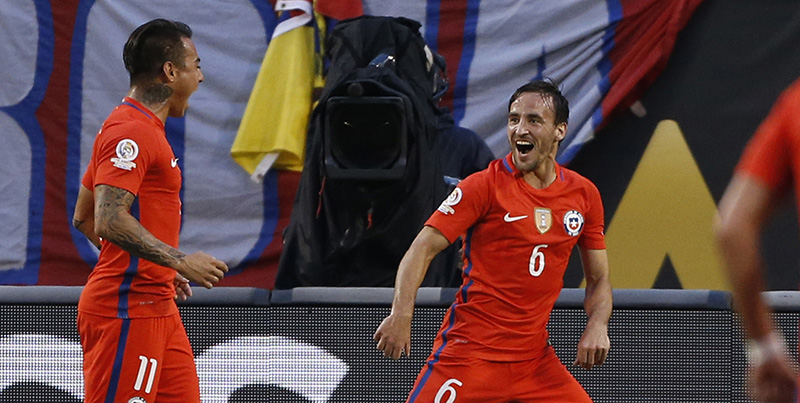 First came Charles Aranguiz’s goal in the seventh minute. Jose Pedro Fuenzalida made a run and crossed into the box. The ball was headed down by Colombia’s Juan Cuadrado in an attempt to clear, but it came to Aranguiz who slotted under Colombia ‘keeper David Ospina with a close-range finish.

Even without suspended star midfielder Arturo Vidal, Chile looked strong on the attack early in a battle of two teams ranked in FIFA’s top five. Fuenzalida put in a rebound off Alexis Sanchez’s post hit in the 11th minute for a 2-0 lead.

Colombia had chances and Chile needed standout goalkeeping from Claudio Bravo, who made two big saves on one Colombia possession just before halftime.

Lightning and torrential rain in the Chicago area delayed the start of the second half more than two hours. Colombia hoped to build on its momentum from the end of the first 45 minutes, but both teams had to navigate the soggy pitch to get chances.

Colombia’s chances of a comeback were diminished when midfielder Carlos Sanchez was sent off in the 57th minute for his second yellow card of the match, leaving Los Cafeteros with 10 players for the duration of the match. Goalkeeper David Ospina had to stop a header on goal in the 66th minute.

Colombia’s loss sends them to Glendale, Arizona on Saturday for the Third Place Match against the United States. The game is a re-match of the tournament opener which Colombia won 2-0 and also marks the second time the two nations met in the Third Place Match, with the first coming during the 1995 edition – a 4-1 Colombia victory.