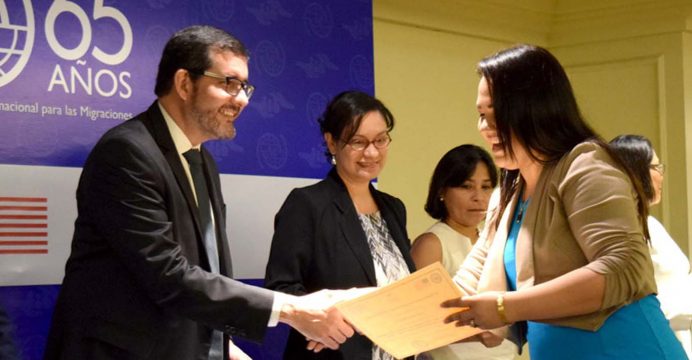 Nearly three hundred representatives of civil society and the governments of El Salvador, Guatemala and Honduras were trained by IOM on issues such as national policy and the international protection framework for migrant children and adolescents.

The workshop called Specialized Course on Migrant Children and Adolescents with emphasis on the Unaccompanied in the Northern Triangle of Central America, North and South of Mexico was designed to allow participants to develop, from their own institutions, practices based on human rights, gender, diversity, multiculturalism and Best Interest of the Child guidelines.

The course was co-facilitated by a panel of experts from institutions such as UNICEF and the United Nations High Commissioner for Refugees (UNHCR).

“We are aware that the guarantee of fundamental rights of the vulnerable population cannot be addressed individually, so we seek to establish strategic alliances to optimize migration management and contribute to El Salvador, Guatemala and Honduras to achieve the Sustainable Development Goals, specifically in regard to the end of contemporary forms of slavery and human trafficking, and all forms of violence and torture against children and adolescents,” said Jorge Peraza Breedy, IOM’s Chief of Mission for El Salvador, Guatemala and Honduras.

In El Salvador, institutions directly involved with the course were the National Council for Childhood and Adolescence (CONNA); the Salvadoran Institute for the Integral Development of Children and Adolescents (ISNA); and the Directorate General of Immigration (DGME). Guatemalan entities receiving training included the Ministry of Social Welfare (SBS); the Attorney General’s Office (PGN); the General Directorate of Migration (DGM); the Human Rights Ombudsman (PDH); the Secretariat of Social Works of the Wife of the President (SOSEP); and the Specialized Unit for Children and Adolescents of the National Civil Police. In Honduras, staff capacities of the National Migration Institute (INM) were strengthened; as well as the Directorate for Children, Youth and Family (DINAF); the Public Ministry and the National Autonomous University of Honduras (UNAH).

Representatives of each of these institutions committed to replicate what they have learned, thus increasing the scope of the course. “The course was very useful because I realized I was not using the vision that should, taking into account the Best Interests of the Child. With the information that was provided, that view was changed and thus I can improve the service delivered,” said Delmy Gonzales of El Salvador’s Board of Educator Standards of the Ministry of Education.

“Knowing the Human Rights and the Best Interest of the Child approaches is essential to do our work, both for regular and irregular migrants. We will replicate the knowledge we’ve received at this training to other project partners,” said José Edward Umanzor, an Inspection Agent for INM in Honduras.

This workshop was held under the Regional Program Strengthening Capacities for the Protection and Assistance to Migrants in vulnerable situations in Mesoamerica (Mesoamerica Project), implemented by IOM with funding from the Bureau of Population, Refugees and Migration (PRM) of the United States Department of State.

IOM reaffirms its commitment to support the governments to achieve orderly migration, to ensure and promote respect for the human rights of migrants, and to strengthen systems of care for unaccompanied migrant children and adolescents, their families and their communities.