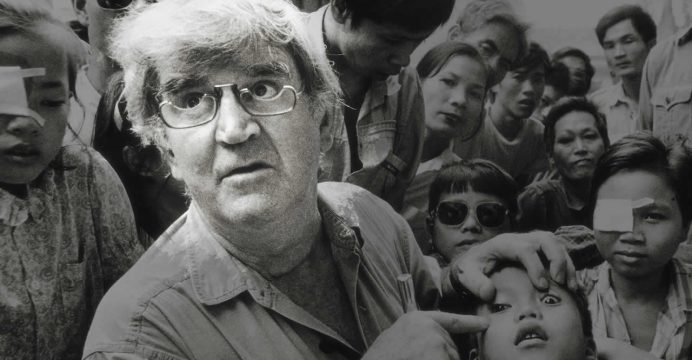 On May 20, 1976, Fred Hollows and teams of health workers set out on the National Trachoma and Eye Health Program with the aim to eliminate trachoma and other eye conditions in rural and remote communities and, for the first time, record the status of eye health in rural Australia.

Exactly 40 years on, The Fred Hollows Foundation, the National Film and Sound Archive and theNational Museum of Australia commemorated this historic Program and Fred’s ongoing legacy with a special event – Remembering Fred Hollows.

More than 150 Canberrans and special guests were captivated as they listened to Gordon Briscoe, Rose Murray, Trevor Buzzacott and Gabi Hollows share their personal experiences of the Program, reflect on the importance of their work, and discuss the future of Aboriginal and Torres Strait Islander Health.

“It was extraordinary that we were delivering first class ophthalmology in the most remote parts of Australia,” said Gabi Hollows.

Over the course of two years, Program teams visited more than 465 communities, screened 100,000 people, and treated more than 27,000 Indigenous Australians for trachoma.

As a result of the Program, the number of Aboriginal and Torres Strait Islander people suffering avoidable blindness was halved.

The event was also the first public screening of footage from the documentary They Used to Call it Sandy Blight, since it controversially aired on the ABC in 1978.Produced by independent filmmakers, the documentary highlights the appalling living conditions experienced by Aboriginal and Torres Strait Islander communities at the time.Earlier this year, The Foundation donated this historic footage to the National Film and Sound Archive where it has since been preserved, remastered and included in their public archive.Fred Hollows examines the eyes of a patient during the National Trachoma and Eye Health Program.

The event was an opportunity to commemorate the remarkable success of the Program, but also to discuss what more needs to be done to close the gap on Indigenous health.

Australia remains the only developed country with trachoma, and Aboriginal and Torres Strait Islander peoples are six times more likely to go blind that other Australians.

Fred would be calling on all of us to continue to advocate for change and ensure Aboriginal and Torres Strait Islander Australians exercise their right to good health.