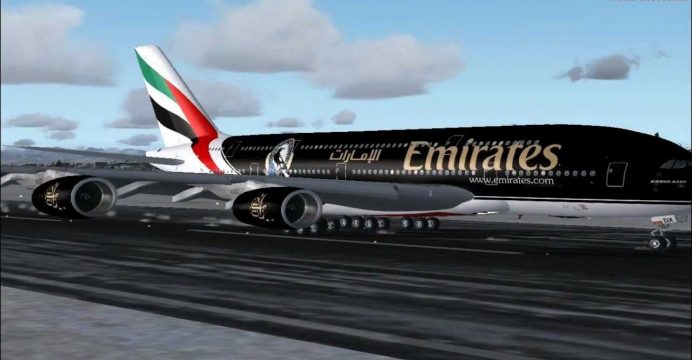 Los Angeles Dodgers fans were on their feet in the stands after Emirates Cabin Crew members shared a fun airline safety-inspired demonstration on how to best prepare for nine innings of baseball and share their Dodger passion with an Emirates twist. Moments before the game against the Cincinnati Reds started, nine members from Emirates Cabin Crew made their way to the field and gathered around the pitcher’s mound for a pregame warm up and first pitch. From pointing out the 10 stadium gates and 21 terraced entrances to seventh inning stretch tips and how to prepare for a “rally cap” emergency, the Emirates Cabin Crew, who were later joined by Dodger legend Orel Herscheiser for the first pitch, delivered a witty performance to share in the Dodger’s fandom and celebrate Emirates’ first year of sponsorship for the iconic team.

Emirates has a deep affinity for sport because like sport, Emirates has the ability to connect people and their passions. With their Cabin Crew, Emirates has taken to the soccer and cricket pitch with SL Benfica, Hamburg SV and at the ICC World Twenty20 and now to the baseball field at the United States’ largest baseball stadium to cheer on the Los Angeles Dodgers.

The activation in the stadium complements Emirates ongoing commitment to Los Angeles, where Emirates has provided daily service since 2008 and will launch second daily A380 service from Dubai International Airport (DXB) to LAX on July 1, 2016.

To watch the ‘demonstration’ in full visit: https://youtu.be/chhh4-2plYY

Emirates and the U.S.

Founded in 1985, Emirates is a global connector of people, places and economies. Based in Dubai, the airline’s global network serves over 155 destinations in 81 countries across six continents. Its luxurious amenities, regionally inspired gourmet cuisine, award-winning in-flight entertainment system – ice, and unmatched hospitality provided by its iconic multi-lingual Cabin Crew have made Emirates one of the world’s most recognized airline brands.

Emirates has been serving the US since launching services to New York in 2004 and has carried over nine million passenger in the past decade. The airline currently flies to nine U.S. gateways – Chicago (ORD), Boston (BOS), San Francisco (SFO), Los Angeles (LAX), Seattle (SEA), Dallas/Fort Worth (DFW), Houston (IAH), Washington (IAD) and New York (JFK), operates a trans-Atlantic route between JFK and Milan and a freighter service to Atlanta and will service Orlando (MCO) beginning September 1, 2015. Emirates SkyCargo transports up to 650 tons of U.S. exports each week – including auto parts from New York, apples and cherries from Seattle, and oil and gas equipment from Houston – stimulating trade and opening new markets for American businesses across the Middle East, Africa and Asia.