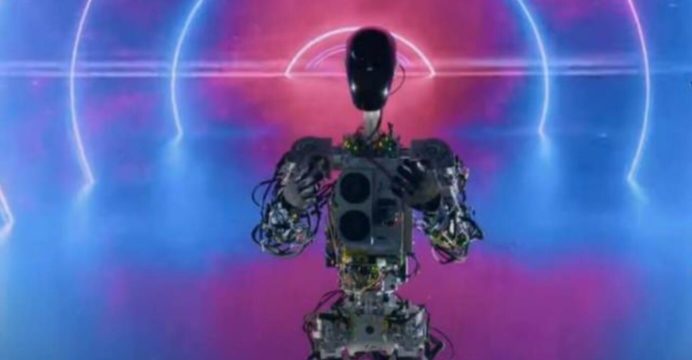 Tech billionaire Elon Musk has presented the latest prototype of a humanoid robot being developed by his Tesla electric car company. Optimus appeared on stage at a Silicon Valley event, where it waved to the audience and raised its knees.

The CEO said the robot was work-in-progress but could be on sale to the public in a few years’ time.

The prototype was wheeled on stage during an annual Tesla AI [artificial intelligence] Day presentation. People were shown a video of Optimus performing simple tasks, such as watering plants, carrying boxes and lifting metal bars.

The Tesla boss spoke of “a future of abundance” ahead.

“It really is a fundamental transformation of civilization as we know it,” he continued.

Investors and financial analysts have expressed scepticism that Tesla will turn to robotics, advising it to focus, instead, on projects closer to Tesla’s core business of electric cars. But Mr Musk said he wanted to solve one of the toughest problems artificial intelligence: how to make a machine that can replace a human.

The entrepreneur, who once warned of artificial intelligence being a threat to humanity, said that Tesla wanted to make sure the transition to a society in which robots did the work and people reaped the benefits was a safe one.

“We always want to be careful we don’t go down the Terminator path,” he cautioned, referring to a blockbuster film about a killer cyborg.

He added that Tesla was building in safeguards, including a stop button that could not be be tampered with.

Mr Musk contended that shareholders would determine if the publicly traded company was socially responsible. Tesla’s AI Day is aimed at recruiting and showcasing latest products.