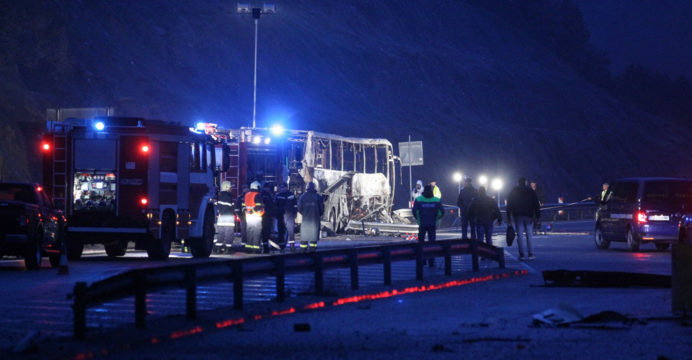 At least 45 people killed in bus accident in Bulgaria

At least 45 people were killed in an overnight bus accident on a highway south of the Bulgarian capital, officials said Tuesday. The cause of the accident has yet to be determined.

“Forty-five or 46 people were killed” on a highway about 40 kilometers (26 miles) from Sofia, Nikolay Nikolov, head of the Fire Safety and Civil Protection department at the interior ministry, told public broadcaster BNT.

“Seven passengers were saved” and taken to a hospital in the capital, he added.

According to the bTV channel, 12 children were onboard the bus, which was traveling from Turkey’s main city of Istanbul to Skopje in North Macedonia.

“We don’t know if all the victims are from North Macedonia, but we assume so because the bus is registered in the country,” he said in an interview with Nova TV.