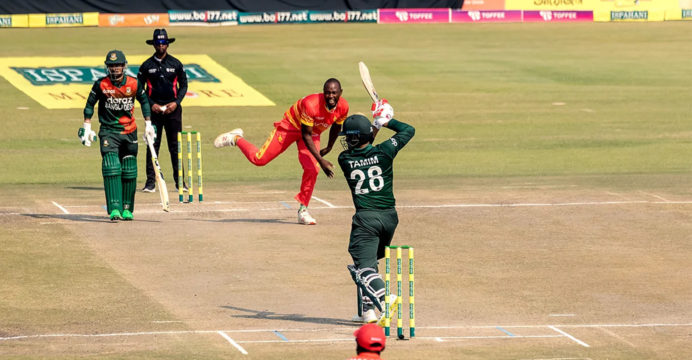 Bangladesh accomplished a clean sweep of Zimbabwe with a dazzling century from captain Tamim Iqbal, who led from the front with a scintillating century.

Today is the final game at the Harare Sports Club. Zimbabwe scored 298 runs before being bowled out in 49.3 overs.

Bangladesh, on the other hand, rode the 112 runs of ODI captain Tamim Iqbal to reach 302-5 with 12 balls to spare.

Tamim’s innings consisted of eight fours and three sixes. Only 97 balls were played.

Shakib Al Hasan led the effort with a stunning 96 not out in the first innings and a three-wicket victory in the second. And it was Tamim’s day, as he scored his 14th ODI century while playing through a knee injury, extending Bangladesh’s winning streak against Zimbabwe to 19 games. It was Bangladesh’s 50th win over the Southern African country.

Bangladesh got off to a terrific start with Tamim Iqbal and Liton Das, who combined for 88 runs in just 13.2 overs.

It was only when Liton died when sweeping shot to be out on 32 that it was broken. Tamim had reached his half-century off 46 balls when he pushed Madhevere square for a single.

Bangladesh’s position was strengthened further by Shakib and Tamim’s 59-run partnership. Shakib was knocked out on 30 when a Luke Jongwe slower undid him.

Tamim, who grew more aggressive after his half-century, slashed Tendai Chatara for a boundary past mid-off off just 87 deliveries. 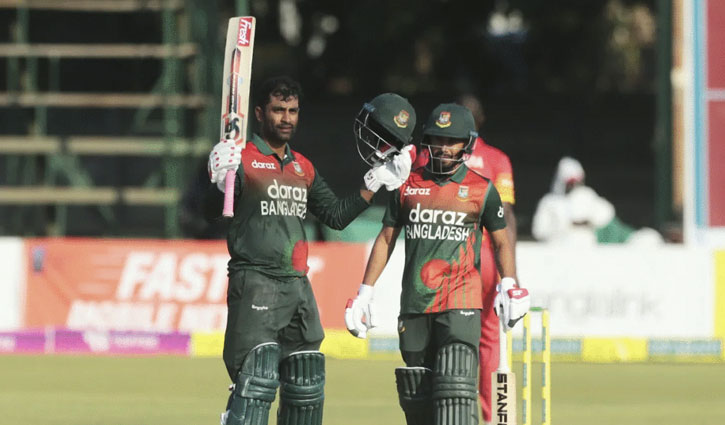 With Mithun by his side, he appeared motivated to win on his own, despite a knee injury that had already kept him out of cricket for two months. After this match, he would rest for two months to heal from his knee injury.

But, due to Donald Tiripano, who struck twice in a row to dismiss Tamim for 112 and Mahmudullah for duck in his 200th ODI, Zimbabwe snatched the game away from them.

Nurul Hasan Sohan and Mohammad Mithun put on a 64-run fifth-wicket stand to help the team recover and get close to win. Sohan seized the side after Mithun was removed on 30, blasting an unbeaten 45 off 39 balls with six fours.

Afif Hossain was not out on 26 off 17, hitting three fours and one six to secure the victory.

Earlier, Zimbabwe’s batters put up a valiant effort, bringing their total closer to 300.