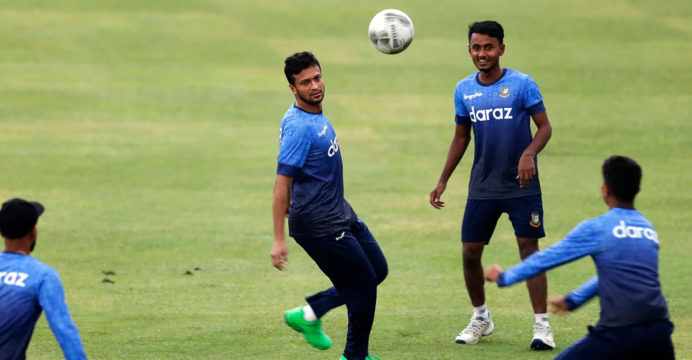 The ace allrounder’s batting form looked ominous since he returned to competitive cricket following his ICC-imposed ban. Even in the last Bangabandhu Dhaka Premier League (DPL), he failed to score a half-century, much to the disappointment of the team management, who wanted Shakib to come back with full glory with willow.

His bowling form was up to the mark this time. However as Saif Hasan and Nazmul Hossain Shanto paved the platform, Shakib batted with freedom and went after the Zimbabwe bowlers in style.

He struck 14 fours and one six in his fluent knock. Shakib was retired out like Saif and Shanto to give the other batsman to bat in the practice game. Skipper Mominul Haque was the notable scorer with 29.

Till the filing of this report, Bangladesh reached 263-2 in 71 overs with Liton Das and Mahmudullah Riyad batting on 20 and 12 runs respectively.

Earlier, Saif Hasan was retired on 65 while Shanto retired after scoring 52.