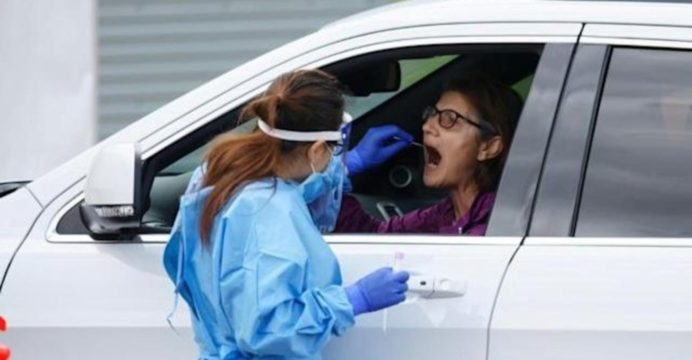 The outback town of Alice Springs became the latest Australian population centre to lockdown on Wednesday, as anger mounts over the country’s slow coronavirus vaccine rollout.

The usually busy streets of Sydney, Brisbane, Perth and Darwin have fallen quiet, with millions of Australians under stay-at-home orders as the country battles multiple small outbreaks of the highly contagious Delta variant, reports BSS.

Australia relied heavily on border closures and mandatory hotel quarantine for overseas arrivals to curb the spread of the virus, but has recently struggled to contain the strain, which first emerged in India.

Alice Springs, in the central Australian desert, was the latest place ordered to lockdown as an “extreme precautionary” measure designed to protect a large Indigenous population feared more vulnerable to Covid-19, a state official said.

The 72-hour restrictions came after it was revealed a man linked to a cluster at a nearby gold mine spent several hours at the local airport.

Northern Territory Chief Minister Michael Gunner said the man was probably not infectious but “we cannot take any chances”.

State health officials have lashed out at the federal government over an increasingly confused inoculation drive, calling for clarity on supplies and who is eligible to receive the jabs.

About five percent of Australians are reported to be fully vaccinated, and the pace of the rollout is causing growing frustration in the community.

“It is disgraceful that the situation in Australia has essentially not changed in the last year,” locked-down Perth resident Robert Binczyk told AFP.

“The slow vaccine rollout from the federal government is to blame.”

In response to the backlash, Prime Minister Scott Morrison announced on Monday that the AstraZeneca jab will be available to all people.

Doctors have since pushed back against the decision, saying it went against expert advice about the risk of extremely rare blood clots associated with AstraZeneca.

Queensland state chief health officer Jeannette Young said she did not understand Morrison’s “thought process”, saying it was an unnecessary move in a country without widespread community transmission.

“We are not in a position that I need to ask young, fit, healthy people to put their health on the line getting a vaccine that could potentially significantly harm them,” she said.

And state Health Minister Yvette D’Ath complained that Queensland had been refused additional supplies of the Pfizer vaccine despite its lockdown of major population centres, saying it would run out in eight days.

“I am disappointed that we have been denied any extra vaccines… despite the fact we’re going to start running out,” she said.

Australia has recorded just over 30,000 cases and 910 deaths in a population of about 25 million since the pandemic began.