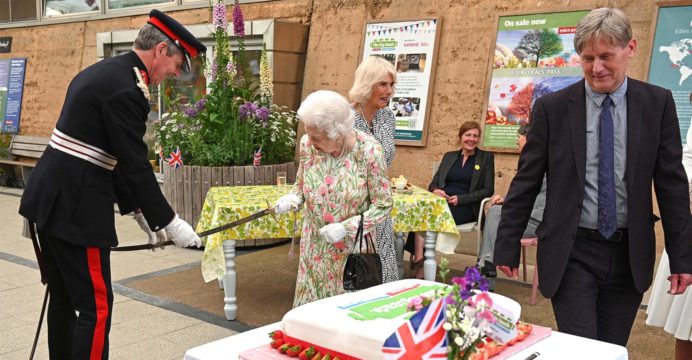 The Queen was presented with a giant cake in Cornwall to celebrate her official birthday. The cake was presented to the Queen at ‘The Big Lunch’ at the Eden Project in Cornwall, UK. Then the queen cut the cake with a sword instead of a knife.

Lord Lieutenant Edward Ballitho of Cornwall handed a sword to Queen Elizabeth II, as seen in the video. Queen Elizabeth cut the cake with that sword. Despite a traditional knife being available, Her Majesty went for a more unorthodox method, using a ceremonial saber to do the honors.

The botanical garden in Cornwall is currently hosting world leaders for the G7 summit. After being shown around the center, the Queen was offered the chance to cut her cake.

Queen Elizabeth appeared in public for the second time on Friday (June 11) after the death of her husband, Phillips.