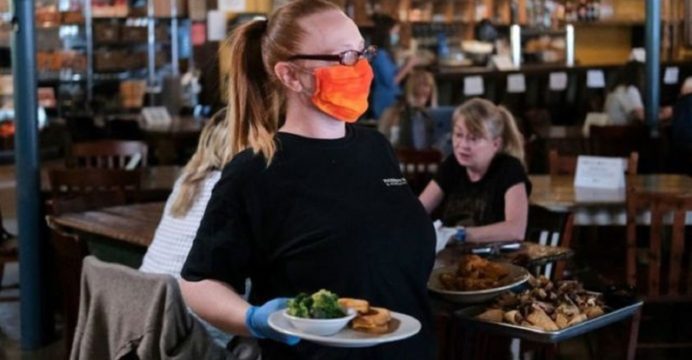 The US economy saw an increase in hiring in May as restrictions eased, although fewer jobs were added than expected.

Employers created 559,000 jobs, driven by reopenings at restaurants, bars and hotels in particular. That failed to meet economists’ expectations of 675,000 jobs being added, reports BBC.

However, the hiring did help lower the unemployment rate to 5.8% from the 6.1% seen in April.

Despite the modest increase, President Biden described the report as “great news”, adding: “This is progress, historic progress [after] our worst crisis in 100 years.”

In all, 9.3 million people remain unemployed – down considerably from the highs seen in April last year, although still well above the pre-pandemic measure of 5.7 million in February 2020.

Some of the worst-hit sectors during the pandemic – such as hospitality and education – saw significant numbers of jobs being added as a vaccination drive continued and restrictions eased.

The number of jobs in restaurants, cafes and bars jumped by 292,000, for example.

And the monthly report from the US Bureau of Labor Statistics showed that the number of long-term unemployed fell by 431,000, although it still remains at 3.8 million.

But he suggested: “Now we are seemingly back on track and signals are pointing towards a bright future for the US.”

Some analysts said there was still an “ongoing mismatch” between supply and demand for workers.

Average hourly earnings rose 0.5% in May from a month earlier, to $30.33, the new figures showed.

“The data for the last two months suggest that the rising demand for labour associated with the recovery from the pandemic may have put upward pressure on wages,” the report said.

Big food firms such as McDonald’s and Chipotle have increased wages, while smaller businesses have started to offer sign-on bonuses in a bid to lure workers back.

He suggested this could be due to several factors – including unemployment benefits, childcare issues or concerns over working conditions.

Under the $1.9tn coronavirus rescue package that President Joe Biden signed into law in March, some workers can get a $300 weekly supplemental benefit if they are out of a job.

But Mr Leiper pointed out that at least 25 states had opted to cut unemployment benefits prematurely, so people are not persuaded to stay at home.

“I expect non-farm payrolls to accelerate from here, as supply rises to meet demand, alongside a continuation of the economic reopening narrative.”