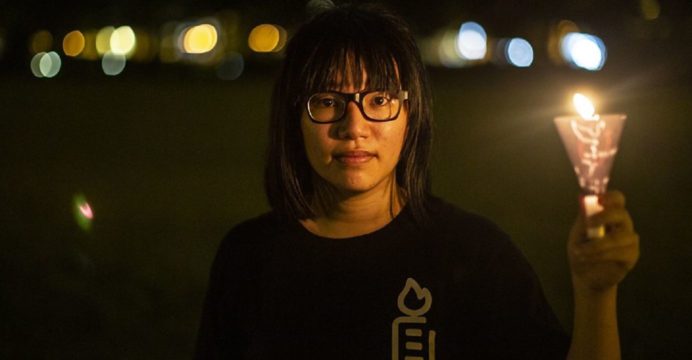 Pro-democracy activist Chow Hang Tung has been arrested by Hong Kong police on the 32nd anniversary of the 1989 Tiananmen Square crackdown.

Ms Chow is vice chairwoman of the Hong Kong Alliance which organizes annual vigils for victims of Beijing’s deadly crackdown on democracy protesters.

She has been arrested for promoting unauthorised assembly.

It comes as Hong Kong has banned the vigil for the second year running, citing coronavirus restrictions.

Hong Kong and Macau are the only places in Chinese territory where people can commemorate the deadly 1989 crackdown on pro-democracy protesters.

But this year, authorities in Macau also banned the vigil for the second year in a row, saying it would violate local criminal laws.

However, Ms Chow continued to call on residents to commemorate the anniversary in their own ways.

“Turn on the lights wherever you are – whether on your phone, candles or electronic candles,” she had posted on Facebook a day before her arrest.

DEFIANT IN THE FACE OF ARREST

Ms Chow was arrested early in the morning outside her office by officers in plain clothes, according to reports.

She was placed in a black saloon car and driven away, the AFP news agency said.

Speaking to the BBC ahead of her arrest, Ms Chow, who is also a lawyer and a human rights activist, said she was prepared for the inevitable.

“I am prepared to be arrested. This is how Hong Kong is now. If you fight for democracy under an authoritarian regime, being arrested is unavoidable. Let it come. I am willing to pay the price for fighting for democracy,” she said.

There was international condemnation after troops and tanks opened fire on protesters in Beijing – estimates of the dead vary from a few hundred to several thousand.

Despite this, tens of thousands of people defied the ban, knocking down barricades that had been erected around Victoria Park.

However, this year’s Tiananmen anniversary is the first since a new controversial security law was approved, aimed at ending the city’s pro-democracy movement and criminalising dissent.

Around 100 people have been arrested since the law was enacted in June.

“This will be the first June 4 since the National Security Law. Many ask if the vigil will disappear. I think we have been persisting for more than 30 years. It is more or less in Hong Kong people’s DNA,” Ms Chow told the BBC before her arrest.

In mainland China, authorities have banned even oblique references to the events of June 4. Online, any discussion of the crackdown is strictly censored.

Taiwan commemorates the anniversary every year, using the event to criticise China and urge Beijing to embark on real political reform.

On her Facebook page, President Tsai Ing-wen wrote: “I believe that all Taiwanese who are proud of their freedom and democracy will never forget about this day and will firmly stick with their faith, unshaken by storms.”

The US Secretary of State, Antony Blinken, said America stands with the people of China in their fight for human rights, adding that US honours “the sacrifices of those killed 32 years ago, and the brave activists who carry on their efforts today in the face of ongoing government repression.”