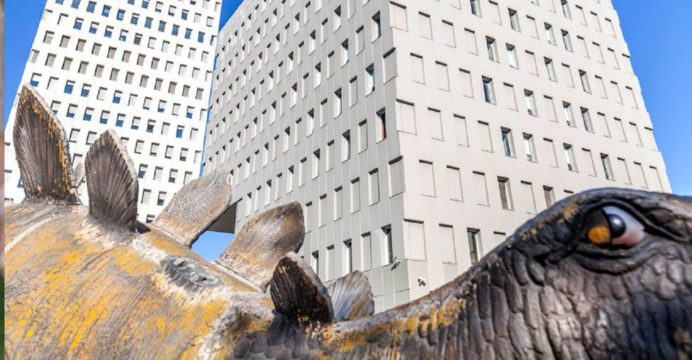 Missing man’s deadbody found inside a dinosaur statue in Spain

Spanish police are investigating the death of a 39-year-old man whose body was found inside a dinosaur statue.

Authorities were alerted on Saturday after a father and his son noticed a smell emanating from the papier-mâché figure in Santa Coloma de Gramenet, a suburb of Barcelona.

The father then saw the corpse through a crack in the Stegosaurus’ hollow leg.

Police said the man had been reported missing by his family, and no foul play is suspected. Three fire brigade teams were called to scene after the body was discovered, and firefighters cut open the dinosaur leg to retrieve it, reports BBC.

Local media report the man – who has not been named – was trying to retrieve a mobile phone he dropped inside the statue. He then fell inside the decorative figure and was left trapped upside down, unable to call for help.

Police have not confirmed how the man ended up inside the dinosaur, and are awaiting the results of his autopsy to find out how he died.

The decorative statue has been removed from its place outside the city’s Cubic Building, where it had been used to advertise an old cinema.