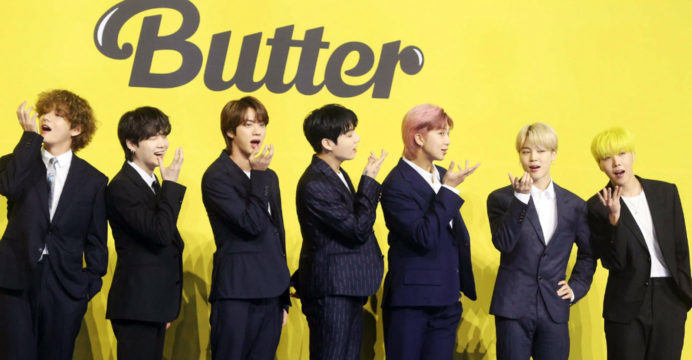 BTS got 13 crore views in one day

Popular K-pop band ‘BTS’ means record. It all started with dynamite. Then they have surpassed themselves.

BTS’s second English song ‘Butter’ has been released recently. In just 13 minutes, it has 10 million views. And in 1 day it was seen by about 13 crore viewers. More than 53 lakh comments have been read.

Butter’s teaser was shared by BTS in late April. Shares 15-second short clips from their account. Where a butter-shaped gain sign was seen melting.

Ever since then, the excitement among the fans over the song was at its peak. Eventually, it came to an end. ‘Butter’ was released on May 23. The song was written by Rob Grimaldi, Stephen Kirk, Ron Perry, Jenna Andrews, Alex Belovits and Sebastian Garcia.

Earlier this year, BTS announced their new album. It will be released on June 18. It will have 23 Japanese songs.

BTS is popular in Korean as well as Japanese songs. Last year, their most successful album, Map of the Soul: ৭, was arranged with Japanese songs. Earlier also 3 albums were released from Japan. All of them are very popular.

BTS’s Japanese album is titled ‘The Best’. In addition to the new songs, some of the band’s popular songs have been added to the Japanese version. These include ‘Idol’, ‘Mike Drop’, ‘Boy Wich Love’, ‘Make It Right’.