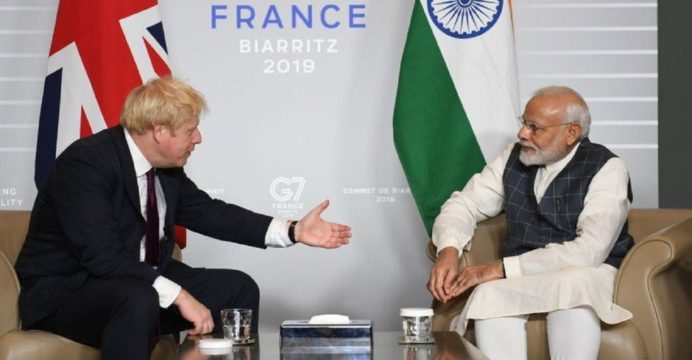 The British prime minister has announced new trade and investment deals with India worth £1bn. It includes more than £533m of new investment from India into the UK, which is expected to create about 6,000 jobs.

“The economic links between our countries make our people stronger and safer,” said Mr Johnson.

The deal, announced ahead of a virtual meeting with India’s Prime Minister Narendra Modi, includes a £240m investment by the Serum Institute of India, which will support clinical trials, research and possibly the manufacturing of vaccines.

Serum has already started phase one trials in the UK of a one-dose nasal vaccine for coronavirus, in partnership with Codagenix.

“Each and every one of the more than 6,500 jobs we have announced today will help families and communities build back from coronavirus and boost the British and Indian economies,” said Mr Johnson.

‘TIP OF AN ICEBERG’

Trade Secretary Liz Truss told reporters that the jobs would be created “within the next year or so”.

She said those commitments were “very different” from a free-trade deal, which the two governments will start negotiating on this autumn. Discussions will include lowering tariff barriers and new agreements on “digital and data”.

The announcement on 6,000 jobs “is really the tip of an iceberg” Ms Truss said.

Trade between the UK and India is worth about £23bn per year, and the government hopes to double that by 2030.

The do that, the UK is likely to have to relax immigration rules between India and the UK, Ms Truss added.

“We’ve already made significant steps in improving the immigration regime with the post-study work visa. We’ve seen a massive rise in Indian students coming to the UK.”

“Business mobility is a key part of trade. Particularly as the UK and India are both very strong in services, you need to make sure you’re able to get your professionals over to the country,” Ms Truss added.

Meanwhile, British businesses have secured export deals with India worth more than £446m, which are expected to create more than 400 British jobs.

They include a £200m deal involving CMR Surgical, which will create 100 new UK jobs.

The company’s next-generation ‘Versius’ surgical robotic system – which helps surgeons perform minimal access surgery – will be rolled out to hospitals in India.

Trade between the UK and India is already worth around £23bn a year, supporting more than half a million jobs, according to the government.

Mr Johnson said: “In the decade ahead, with the help of new partnership signed today and a comprehensive free trade agreement, we will double the value of our trading partnership with India and take the relationship between our two countries to new highs.”

Trade body the CBI said the updated trade partnership “shows the world the strength of our relationship”.

CBI president Lord Bilimoria said the talks would “unlock opportunities for businesses, boost job creation and growth across the country”.

Mr Johnson had been forced to cancel a planned visit to Delhi as it battles with a brutal second wave of coronavirus cases.

The visit was designed to foster closer ties between the two countries and had first been scheduled for January.

It was delayed after the UK’s higher wave of Covid infections over winter.

A four-day trip was scheduled for April before being cut back to just one day in Delhi, before being postponed indefinitely last month, with India subsequently added to the UK’s travel “red list”.

On Monday, authorities in Delhi called for help from the army. The government wants it to run Covid care facilities and intensive care units.

Across India, case numbers since the start of the outbreak are closing in on 20 million.

In response to India’s coronavirus surge, the British Asian Trust has raised more than £1.6m in the last week through its emergency appeal.