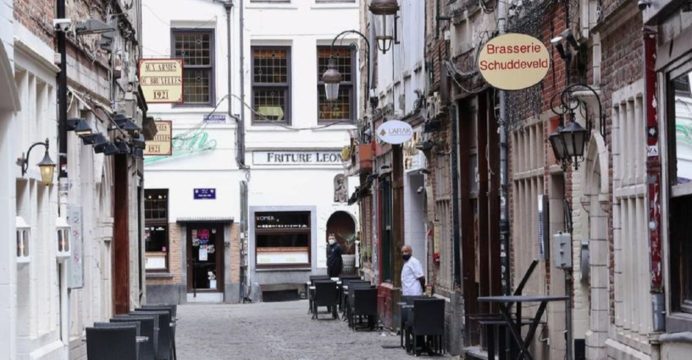 Bars and cafes in Brussels will be forced to close for a month from Thursday, the regional government said on Wednesday after the Belgian capital overtook Paris in terms of COVID-19 infections per inhabitant.

Brussels is second only to Madrid among the European Union’s 27 capital cities, Belgian health authorities said on Wednesday, with 502 coronavirus cases per 100,000 residents over the past two weeks, reports Reuters.

Rudi Vervoort, premier of the Brussels region, told a news conference that bars and cafes would shut for a month from Thursday, even if they only sold tea or coffee, mirroring action taken on Tuesday in Paris.

“Serving alcohol is not the criteria here,” he said.

Authorities will decide at another meeting on Friday whether and how to keep schools and universities open.

The Belgian government tightened national measures on Tuesday, including the closure of bars at 11 p.m. and limiting social groups to no more than four people invited inside a home, seated at a single cafe table or gathered outside.

In Brussels, people will also be forbidden from drinking alcohol outdoors.

Party venues, where health authorities said many infections occurred, will also have to shut down. No spectators will be allowed in sports centres to watch amateur sport.

Experts attribute the second wave of the pandemic in Belgium, like elsewhere in Europe, in part to people – especially the young – tiring of months of social distancing and other restrictions maintained to curb the spread of the virus.

COVID-19 has claimed 10,092 lives in the small country of 11 million people, one of the highest per capita fatality rates in the world. Belgium hosts European Union institutions and the headquarters of the NATO military alliance.

The average daily number of new infections over a week passed 2,400 on Wednesday. Hospital admissions are also rising again, as are deaths from the virus in Belgium.