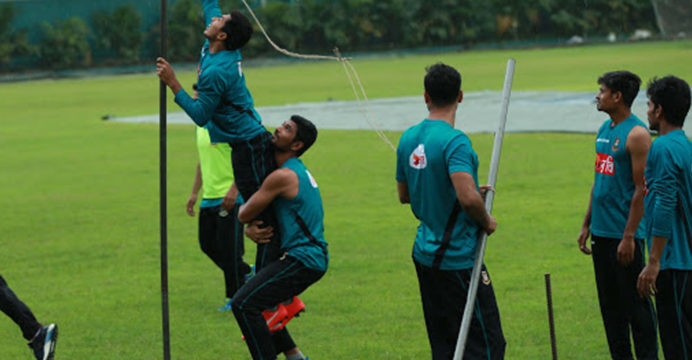 The Tigers started skill training ahead of the Sri Lanka series

After 198 days, Bangladesh cricketers got the opportunity to do skill training in the group. Skill training begins today at the Sher-e-Bangla National Cricket Stadium in Mirpur.

Cricket activities in the country have come to a standstill since the outbreak of the coronavirus in mid-March. The cricketers returned to the field on July 19 after the Bangladesh Cricket Board (BCB) organized a private practice.

Before the start of practice, coach Russell Domingo gave some advice to the cricketers. The cricketers then split into two teams and played a football match for 20 minutes. After sweating with football, they started skill training.

The cricketers continued their personal practice at various venues. However, as the three-match series against Sri Lanka progressed quickly, the BCB started group practice, but not before creating bio-protection for cricketers.

Before the start of the camp, all the cricketers got negative results in the Corona test. The BCB is sending cricketers and coaching staff to Hotel Sonargaon in a bio-security environment, where two floors have been rented for them.

At Hotel Sonargaon, 35 staff members who will serve the players in a bio-protection environment were also tested. Two buses have been prepared for the cricketers. Two buses will travel from hotel to stadium and from stadium to hotel for players to practice. The drivers of the two buses will also be in a bio-safety environment.