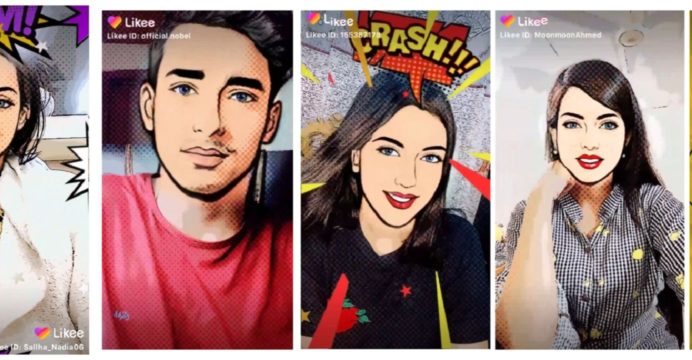 With the help of this effect, users can create cool and fashionable eye-catching posters with their Likee IDs. The feature provides a free and simple yet elegant approach, which is in contrast with similar but complicated and chargeable features offered by a few other short video platforms. You can trigger the effects simply by nodding, smiling or stretching out your palm. The effect has been designed in a manner that users can apply it easily while creating a singing or dancing video.

While some popular celebrities from Bangladesh, such as actresses Arifa Parvin Zaman Moushumi, Mumtaheena Chowdhury Toya and Sallha Khanam Nadia have already joined the celebration by creating videos using the effect, many more are slated to join the fun bandwagon in near future. Arifa and Mumtaheena captured their different expressions in their videos whereas Sallha’s cartoon avatar featured her getting a hair massage. Notably, a few celebrities in Russia and Indonesia have already showcased their creativity by making their comic avatars.

Following in-depth research by Likee’s R&D teams, the algorithm has been optimized so that users can enjoy the effects irrespective of the technical prowess of a mobile phone. The effect can also adapt to different facial features, skin colours and clothing styles, ensuring a more localized approach. The combination of short-video and poster format makes the videos easily sharable across different social platforms.

Likee spokesperson said, “ComicBeats is deeply rooted in the comic cultural phenomenon that’s universally applicable to the younger generation. The philosophy is to prioritize users and inspire their creativity. Likee has shown its ambition to leverage effects to boost a business model for collaborations with global brands.”

Based on Likee’s philosophy of ‘Let You Shine’, the effect inspires creativity and lets users express themselves in as diverse ways as possible.