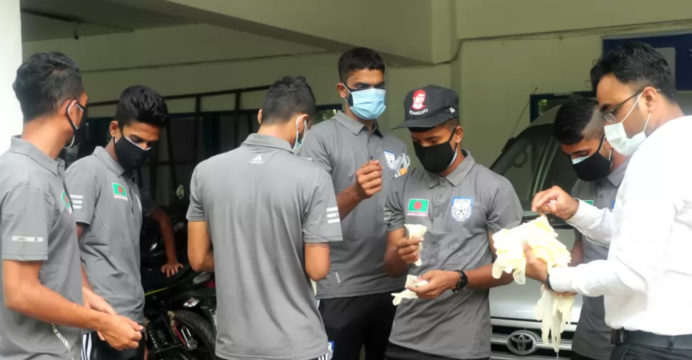 Football activities in Bangladesh have started from yesterday through the national team camp after the break of the coronavirus epidemic. But the practice camp was hit on the day of its return. On the first day, four-player found corona positive. Today, five more footballers have been identified again. So far, 24 footballers have been tested in two days.

The training camp has started ahead of the World Cup and Asian Cup qualifiers. The regular face of the team Bishwanath Ghosh was found corona positive on the first day of the national team camp. The other three are newcomers MS Bablu, Nazmul Islam, and Sumon Reza. Among the five corona caught today are three Abahani Limited footballers and two Bashundhara Kings footballers. The three members of Abahani are Mohammad Tutul Hossain Badsha, Sohail Rana, and Shahid Alam. Bashundhara’s two footballers Mohammad Ibrahim and Sushant Tripura.

In all, a total of 31 footballers were supposed to go to the camp at Sarah Resort in Gazipur in three phases. But since 9 footballers were affected by Corona in two days, the question naturally arises whether any new player will be taken? Nothing is known about this yet. However, in such a situation, the emphasis should be on hygiene, said Bangladesh coach Jamie Day.

Bangladesh will start the World Cup qualifiers again in October 8 with a match against Afghanistan in Sylhet. The first two weeks of the camp, which starts tomorrow, will be practiced in small groups.