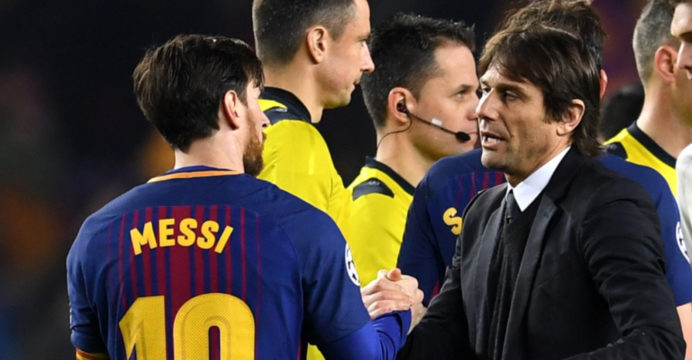 “We’re talking fantasy football, a situation that cannot be approached at Inter for many reasons,” Conte told after Inter knocked down Genoa by 3-0 goals to move second in Serie A.

Six-time Ballon d’Or victor Lionel Messi, 33, has spent his whole professional career at FC Barcelona with his contract due to expire in 2021.

“I don’t think there is a madman in the world who does not want Messi, but he is really far from us and what we want to build,” added the former Juventus and Chelsea coach.

“Leo is not our goal and I don’t think he wants to leave Barcelona,” stated Marotta.

Conte, meanwhile, said he hoped that the club could reach an agreement with Manchester United concerning on-loan forward Alexis Sanchez so that he could play the Europa League with Inter.

Sanchez, sidelined for months with a knee injury, scored on Saturday with his former United teammate Romelu Lukaku getting a brace.

“I hope that the club can resolve the situation because so far, Alexis hasn’t been available much,” said Conte. “To have a quality alternative in the attack would be vital for us.”