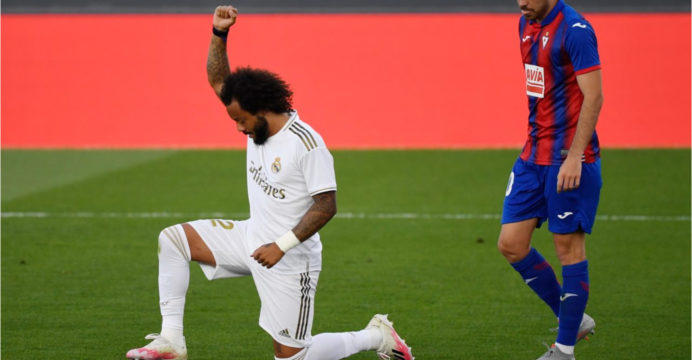 Marcelo takes knee as Madrid return with win over Eibar

Marcelo celebrated by taking a knee as Real Madrid returned from three months away following the coronavirus postponement by beating Eibar 3-1 on Sunday.

After getting Madrid’s third goal in the 37th minute, Marcelo fell onto his left knee and raised his clenched right fist into the air, possibly in support of the Black Lives Matter movement.

Real Madrid’s win may have occurred at a cost as Eden Hazard and Sergio Ramos were both substituted early in the second half and were seen with ice packs strapped to them while relaxing in the stands.

Hazard was getting his first start since February and his ice pack seemed to be around his troublesome right ankle, which he injured in November and February, before undergoing surgery in March.

Madrid’s win means they reduce the gap behind league leaders Barcelona back to two points after the Catalans thrashed Real Mallorca 4-0 on Saturday.