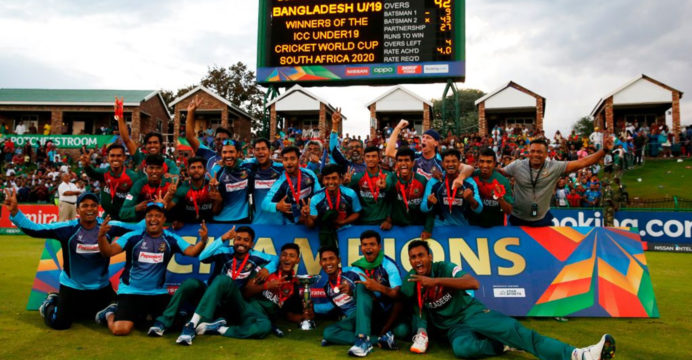 Bangladesh Under-19 team to be accorded heros welcome at home

The champions Bangladesh Under-19 team will be accorded hero’s welcome at home as the government is set to organize a ‘public reception’ to celebrate the country’s first World Cup triumph.

This was Bangladesh’s first silverware in an ICC tournament across all levels and the reception is promised to be greater than what was given to the ICC Trophy-winning Bangladesh team in 1997. The ICC Trophy victory gave Bangladesh an identity as a cricketing nation and widened their path to achieve the Test status.

The Bangladesh Youth team edged defending champions India past by three wickets at Senwes Park in Potchefstroom, South Africa on Sunday for the country’s biggest trophy in its cricket history.

In what was their first appearance in the final in 22-year Under-19 World Cup history, Bangladesh held the nerve in immaculate fashion to beat the mighty Indians, who were four-time champions.

Bangladesh first bowled out India for 177 in 47.2 overs and then did well enough to chase down a revised target of 170 in 42.1 overs under the Duckworth-Lewis method with captain Akbar Ali leading from the front with a heroic 43 not out. 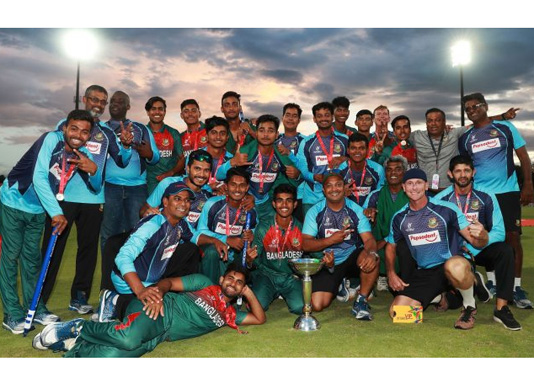 Country’s Prime Minister Sheikh Hasina has already described clinching of the ICC Under-19 World Cup trophy by Bangladesh Under-19 Cricket Team as a gift for the nation in the Mujib Borsho (Mujib Year). While addressing at the outset of today’s cabinet meeting at the Prime Minister’s Office (PMO) this morning, she also announced that the team will be accorded a grand reception after their return home for the great success.

“Winning the ICC Under-19 World Cup trophy by the Bangladesh Under-19 Cricket Team is a gift for the nation in the Mujib Borsho,” the premier said.

Sheikh Hasina recalled that the Bangladesh national cricket team was given a grand reception on the Manik Mia Avenue in the capital in 1997 after becoming champions in the ICC Tournament.

The prime minister said the players of the team did hard work for the last four years ahead of the ICC Under-19 World Cup. “(As a result) they showed an excellent performance throughout the tournament,” she noted.