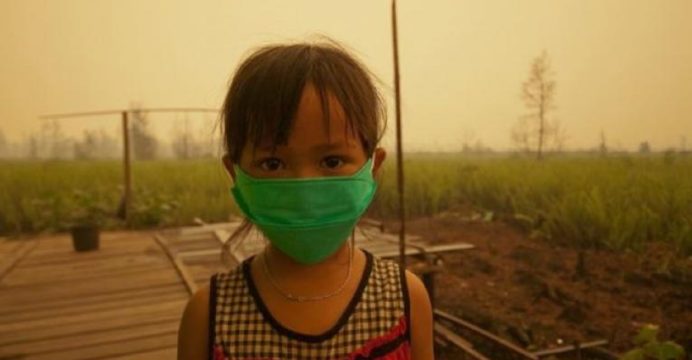 Wild forest and peatland fires across Kalimantan and Sumatra in Indonesia are putting nearly 10 million children at risk from air pollution, UNICEF said.

Small children are especially vulnerable to air pollution because they breathe more rapidly, and their physical defenses and immunities are not fully developed. It is estimated that 2.4million children under five live in the areas most affected by the haze and wildfires, which have been burning in Indonesia since July 2019.

UNICEF warns that air pollution affects babies even before they are born. Research has shown that babies born to mothers exposed to high levels of pollution during pregnancy are more likely to experience reduced growth while in utero, low birth weight, and be delivered preterm.

“Poor air quality is a severe and growing challenge for Indonesia,” said Debora Comini, UNICEF Representative. “Every year, millions of children are breathing toxic air that threatens their health and causes them to miss school – resulting in lifelong physical and cognitive damage.”

According to the Ministry of Education and Culture, more than 46,000 school are currently affected by poor air quality, impacting more than 7.8 million students. Many schools have had to be closed in the most affected areas, depriving learning opportunities from children.

While forest and peatland fires are common in Indonesia during the dry season, the situation is made worse this year because of a combination of factors, including extended droughts and global warming.

“It is vital that families and children receive accurate information regarding their exposure to toxic air pollution, as this will help them to protect themselves”, said Comini.

UNICEF offers support to Indonesian authorities as they work on measures to mitigate the impact of poor air quality on children.