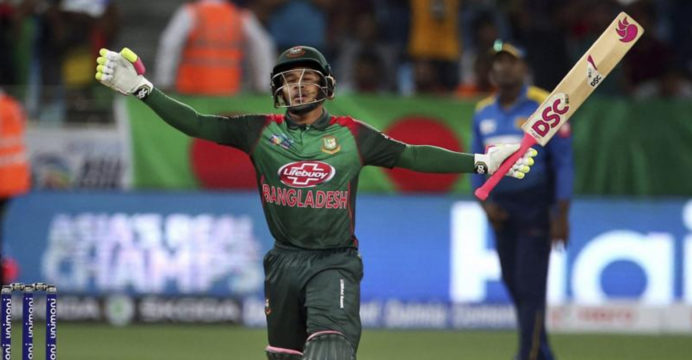 Mushfiqur Rahim’s 98 not out steers Bangladesh to 238-8

The match turned out to be a must-win game for Tigers to stay alive in the three-match series following their 91-run drubbing at the hands of Lankans in the first game.

Mushfiqur Rahim remains not out on 98 off 110, smashing six fours and one six. Mehidy Hasan Miraz scored 43 to come as handy support for Mushfiqur.

No other batsmen however crossed even 20 as they put up a wretched batting performance after Tamim Iqbal opted to bat first in a pitch what didn’t look to have any demons.

Bangladeshi batsmen rather threw away their start, playing some dubious shot. After a decent start, Soumya Sarkar (11) was trapped leg-before by a full toss delivery from Nuwan Pradeep while Tamim Iqbal (19) was undone by a short delivery from Isuru Udana as Bangladesh lost the two openers with the scoreboard reading 31-2. 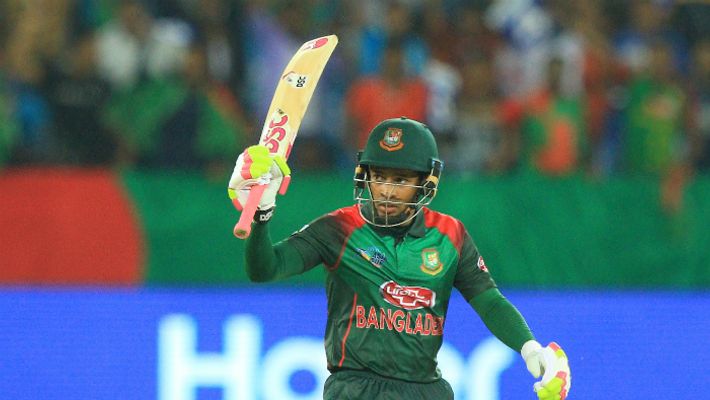 Expectation was high on Mohammad Mithun and Mahmudullah in the crucial game when Mushfiqur Rahim held together with the innings with utmost confidence. But both of them put yet another disappointing performance.

Mithun scored 12, following his 10 in the first match, was got rid of off-spinner Dhanajaya de Silva. Soon after Mahmudullah Riyad followed him after trying to cut a delivery of Akila Dananjaya that spun past him.

Mahmudullah who scored just 3 in the first match, this time made just 6.

Mushfiqur by this time became third Bangladeshi batsmen after Tamim Iqbal and Shakib Al Hasan to bring up 6000-run when on 8, after pushing a Dananjaya delivery to square leg.

Fresh from his 60 in the first match, Sabbir Rahman was run-out on 11, after a mix-up with Mushfiqur, leaving Bangladesh 88-6. Mosaddek Hossain kept up his poor form being out on 13, with Bangladesh 117-6. Young Mehidy put up a batting display that could make top-order batsmen ashamed.

He gave Mushfiqur the apt support as the duo combined for an 84-run for the seventh wickets partnership, taking Bangladesh past 200. Mushfiqur brought up his 38th half-century off 71 balls with a cut past point for a single of Dhananjaya de Silve.

Nuwan Pradeed however got the better of Mehidy with a leg-cutter but Mushfiqur came up with free flowing batting in the last five overs. Still he missed out a ton what he really deserved after Nuwan Pradeep showed an intriguing display Yorkers in the last over.