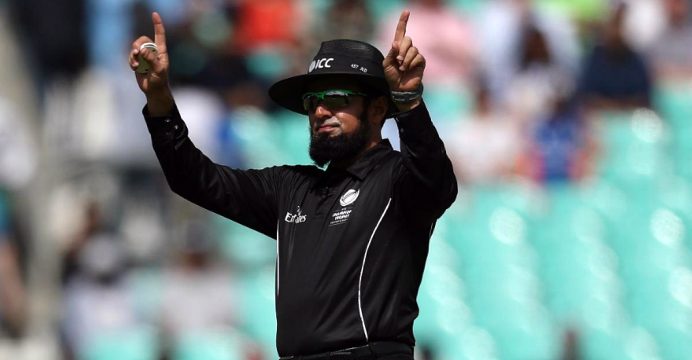 he International Cricket Council (ICC) has congratulated Aleem Dar of the Emirates ICC Elite Panel of Umpires for completing 200 One Day Internationals in the second match of the Ireland tri-series between Bangladesh and the West Indies in Dublin on Tuesday.

The 50-year-old Dar first officiated in an ODI in his hometown of Gujranwala in 2000 when he stood in a match between Pakistan and Sri Lanka. He has been part of ICC’s elite panels since 2004 and will be officiating in his fifth World Cup during the upcoming edition in England and Wales from 30 May to 14 July 2019.

? Congratulations to Aleem Dar, who is officiating his 200th ODI today! ? pic.twitter.com/nK0scBiKOZ

Dar’s career highlights include standing in two ICC Men’s Cricket World Cup finals – in 2007 and 2011. He has also umpired in 125 Test matches, which is the second highest after Steve Bucknor’s 128 Tests, and his 43 Twenty20 Internationals are the highest by any umpire. He is only the third to get to the milestone after Rudi Koertzen (209) and Billy Bowden (200).

Adrian Griffith, ICC’s Senior Manager – Umpires and Referees: “Aleem has been one of our most reliable umpires, who has performed his duties consistently over a long period. The length of his career shows his quality and reflects our belief in him and the role he plays as a custodian of the game. On behalf of the ICC, I would like to congratulate Aleem for reaching this landmark and wish him continued success in his career.”