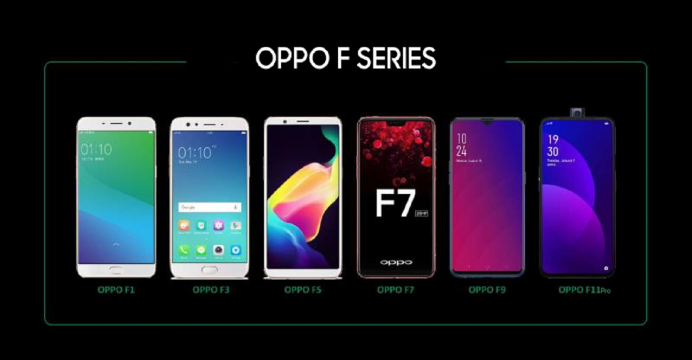 A few years back, there had been a growing demand for midrange phones with stunning camera quality combined with exquisite design. To capture this booming market for midrange phones, OPPO announced to launch their F series with emphasis on front camera for capturing spectacular selfies.

The first in the series was aptly called the F1 which offered an 8MP camera. Afterward, F1 Plus came out with a tagline ‘Selfie Expert’. The highlight of the phone was its 16MP front-facing selfie camera with features such as Selfie Panorama, Beautify 4.0 and the front-facing Screen Flash and the Hi-Light Camera.

OPPO’s focus had always been on photography and this was continued with OPPO F3 by focusing on ‘group selfie’ by adding wide angle front camera. The F3 Plus was also the first one of the OPPO offering the dual front camera. One was aimed at taking solo pictures, while the other was aimed at group selfies with a wide-angle lens.

With the OPPO F5, it was the artificial intelligence or AI designed to enhance the symmetry between your facial features for creating a more natural selfie powered by the company’s huge database of images. It was driven by 16MP front camera and 18:9 aspect ratio.

In the series of these era-defining innovations, the next addition was OPPO F7, the first smartphone in to have a display with resolution Quad HD (2560 x 1440 pixels). It was a panel produced by JDI from 5.5 inches and with a high density of 538 PPI.

If that were not enough to make it stand out in the pile, OPPO Find X is also the first Android smartphone to have replaced the fingerprint reader with the facial recognition 3D.

Ruling the selfie game for a while now, OPPO has no intention to settle down. If you’ve been paying attention to OPPO’s recent portfolio of smartphones, there’s no denying that they’ve been making some of the most attractive smartphones on the market; the F11 Pro is no exception. With the announcement of the F11 Pro in markets around the world, OPPO looks to carry the momentum they built in 2018 into 2019. Finally, with the head-turning features in OPPO F11 Pro rumored to be launched in Bangladesh any day now, OPPO users are eagerly anticipating to experience the next level innovation from the youth-centric ‘Selfie Expert’.