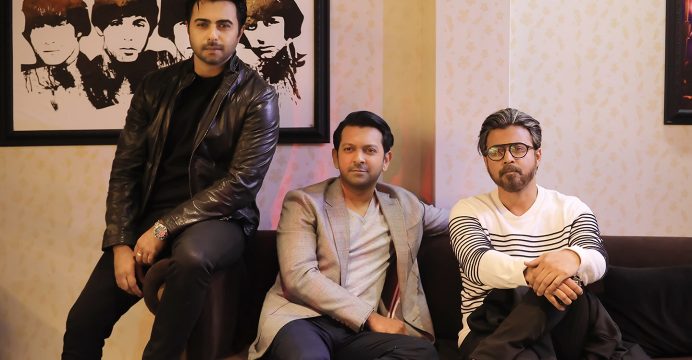 Tahsan, Apurba and Nisho teamed up for the first time ever in a web film ‘Ditio Koishor’

Tahsan Khan, Ziaul Faruq Apurba and Afran Nisho haeamed up for the first time ever in a web film titled ‘Ditio Koishor’. The web film has been produced by ‘Good Company’ and will be released in the popular online streaming platform ‘Bioscope’ on January 23, 2019. The 60-minute-long we film has been directed by Shihab Shaheen.

The plot of the film is based on different dilemmas faced by the three young men in their thirties. It’s a story of how they perceive the world and how they have gone through various incidents in their lives.

Regarding the web film, Director Shihab Shaheen, said, “Even if its very difficult to get these three actors together, they are here for the captivating storyline. Moreover, the increasing popularity of web platforms encourages us to work with new ideas and content. I hope people will like this engaging story of the star-trio.”

Tahsan Khan, Actor said, “People used to watch movies at the theatre and television. However, with the evolution of time, now they watch it in the mobile phones. The main thing is, if the content is good, then people will watch it anyway and that will eventually facilitate the production, advertisement other financial components.”

On the topic of the three actors working together, Ziaul Faruq Apurba said, “It is an amazing thing for me that three of us are working together. Apart from the work, we are very good friends and working with an Director like Shihab Shaheen made it to another dimension.”

Afran Nisho stated, “The online streaming platforms are like archives. Not all work should be judged by the number of viewership. These platforms are increasing and the number of contents too. This is hopeful thing for us. I really enjoyed working for this film as I love portraying for different kinds of roles/characters.”