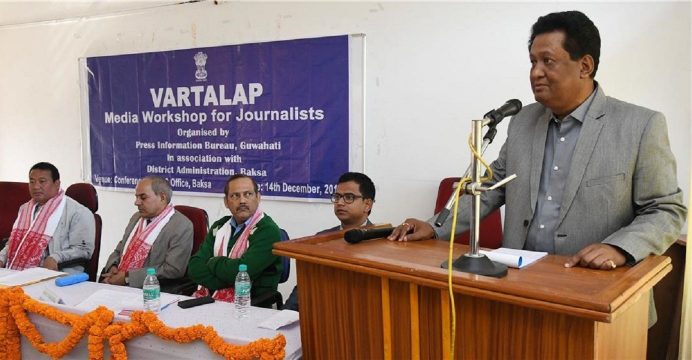 As the Union government has continued implementing various welfare schemes for the benefit of common Indians, the downtrodden section in the society should access to those schemes and here the media can play a vital role, said Ansumwi Khunguri Boro, executive member of Bodoland Territorial Council while addressing a media interactive session, Vartalap at Baksa locality of western Assam.

“We, the government and the media alike, should ensure that people are aware of the various Government programmes and schemes so that they can avail benefits of those schemes. There are a huge range of schemes being implemented by the government nowadays whose main objective is to make the citizens’ lives better,” added Mr Boro.

“Baksa is now considered as an aspirational district and hence we have to put extra efforts in all developmental spheres so that the residents can get benefits from various government schemes. The journalists should play a proactive role in making the public aware of these welfare schemes,” said Gogoi.

He also informed that the district has recently received appreciations for its excellent coverage of government schemes among the public. Mentioning about the Ujjala scheme, Gogoi stated that 90% of Baksa households were covered, where gas connection initiative covered 100% homes in the district.

“In the field of animal husbandry and agriculture too, Baksa has achieved significant success. I appreciate the initiative of media persons here that because of them we could succeed disseminating related information about these policies affectively,” added the deputy commissioner.

KS Dhatwalia, director general for NE Zone in the Union information & broadcasting ministry, while addressing the participating journalists of around 50 from different parts of the district, pointed out that Vartalap was an attempt to sensitize the media about disseminating proper information to the common people. He expected a positive and constructive media across the nation.

Journalist Nava Thakuria also emphasized on a responsible and credible media for the nation, where the scribes have to play the driver’s role in the changing faces of journalism across the globe. He stated that the internet connectivity has made reporting easier, but also posed a serious threat to the professional journalists.