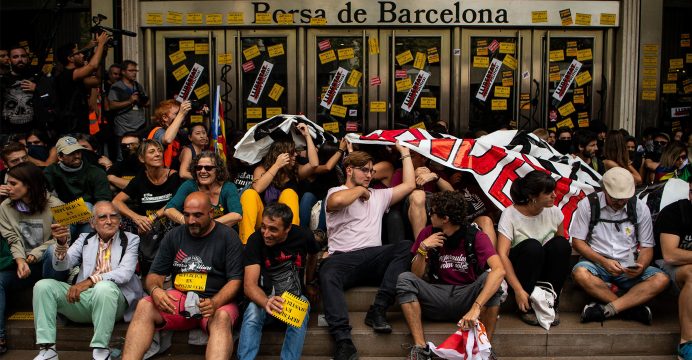 A year after a banned referendum on secession from Spain, tens of thousands of Catalan protesters piled pressure on the region’s separatist government Monday during an anniversary marked by road and railway line blockades and late-night clashes with police.

According to municipal police, 180,000 protesters gathered in Barcelona late in the day behind a banner reading “October 1, no forgetting, no forgiving”, to push for independence at a demonstration called by the influential civic association ANC.

“We’re disappointed because people are pushing things as much as they can but they (politicians) aren’t responding,” Francesc Serra, a 43-year-old gardener, told AFP.

At the end of the demonstration, clashes erupted late Monday between separatists and the regional police forces, with protesters — some with their faces covered — throwing stones at officers who responded by charging.

Hundreds of protesters managed to knock down barriers at the entrance of the regional parliament just after 21:00 local time (1900 GMT).

Earlier in the day, some 500 people cut the main roads of the city and called for the resignation of regional president Quim Torra, a staunch independence supporter whom they nonetheless accuse of failing to stand up to the Spanish state.

“We want to show them that they are where they are thanks to the people and that we have the power,” explained Ana Sarabia, 48.

“If they don’t do anything, we will act,” she told AFP at the demonstration.

Several hundred members of a radical group called the Committees for the Defence of the Republic (CDRs), many covering their faces with scarves, had occupied high-speed railway tracks in the northeastern city of Girona early Monday, briefly blocking service between Figueres and Barcelona.

Central streets in Barcelona and Lleida were blocked, as was the AP-7 motorway south of Barcelona, and the A2 that links the city with Madrid, Catalan TV images showed.

Activists swarmed into Catalonia’s regional government building in Girona and took down the Spanish flag that hangs out front, replacing it with a red, yellow and blue separatist flag.

“A year ago we voted for independence… Let’s act,” the CDRs tweeted.