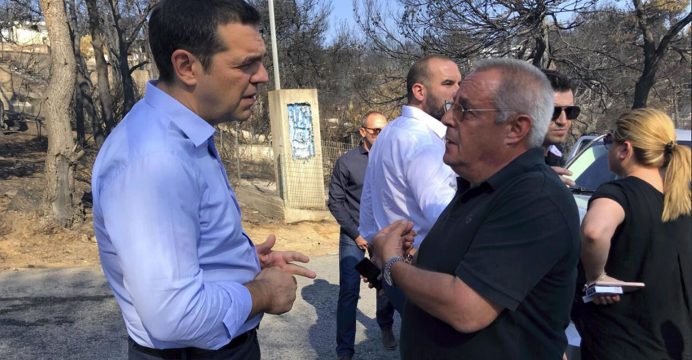 Greek Prime Minister Alexis Tsipras met survivors of a wildfire that killed at least 91 people during his first visit to the town of Mati on Monday, after facing criticism for the government’s response to the blaze.

Fires began a week ago in the coastal resort, which is 30 km (17 miles) east of Athens, and Tsipras has been attacked by opposition parties for the government’s handling of the disaster, which also left dozens injured.

Tsipras has accepted full political responsibility and pledged a series of changes, including a crackdown on illegal and haphazard construction that is thought to have worsened the blaze tmsnrt.rs/2K6N3Qc.

Greek Prime Minister Alexis Tsipras speaks with a firefighter officer as he visits the village of Mati, following a wildfire near Athens, Greece, July 30, 2018. Greek Prime Minister’s Press Office/Handout via REUTERS
He spent around an hour in the area and met locals, firefighters and police officers, his office said in a statement.

“Today I visited the place of tragedy,” Tsipras tweeted.

“(I have) untold grief but also immense respect for those who fought an uneven battle with the flames,” he said.

A total of 25 people are still missing and 28 bodies have yet to be identified, the fire brigade said on Sunday.

Tsipras’ visit comes a week after the disaster and aides said that he had been busy coordinating the response from Athens. His coalition partner went to Mati on Thursday and was shouted at by survivors.

As rescue crews still hunt for those unaccounted for, residents were trying to salvage what they can from the disaster.

“I can’t believe that it took a lifetime to build this and within 10 minutes nothing was left,” 49-year old Konstantinos Gkikas told Reuters. “It’s unbelievable.”

Out of the nearly 2,600 buildings inspected in fire-stricken areas so far, half are intact, 25 percent need to be demolished and the rest can be repaired, the infrastructure ministry said on Monday.

A Greek citizen filed a lawsuit on Monday against the government, the municipal and regional authorities and anybody else found to be involved in the disaster.

Greeks were expected to gather outside parliament to light candles in memory of those who lost their lives later on Monday.