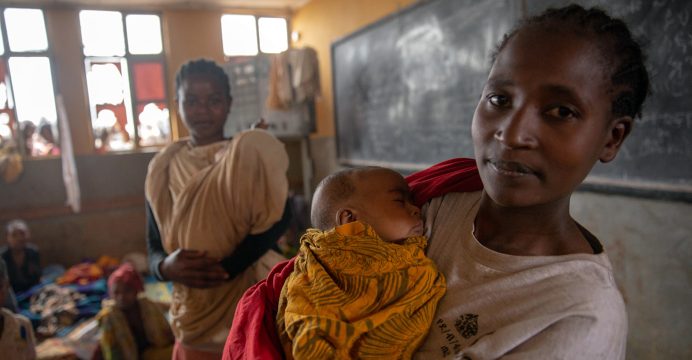 IOM the UN Migration Agency launched an appeal for USD 22,200,000 to respond to the internal displacement crisis in Ethiopia’s Gedeo (SNNPR region) and West Guji (Oromia region) zones. Since April 2018, some 970,000 people have fled their homes due to fighting between communities along the border of the two regions; the vast majority were displaced in June alone.

“Leaving with what little they could carry and typically losing these possessions on their journey to safety, the displaced communities in Gedeo and West Guji are in great need of humanitarian support to help them get through Ethiopia’s cold and rainy season,” said William Lacy Swing, IOM Director General.

“The international community must rally for the people and Government of Ethiopia. Some partners have already begun to do so, and we thank them, but the current funding levels for a sudden onset crisis of this scale – nearly one million people displaced such a short period of time – are nowhere near acceptable,” added Director General Swing.

Since June, IOM has been scaling up its response in Gedeo and West Guji. However, urgent funding is required to continue to provide life-saving assistance. The IOM appeal outlines funding requirements for the next six months in line with the Government’s West Guji-Gedeo response plan.

Many of the displaced population are staying with local communities, while others are sheltering at collective sites like schools, Government properties and disused or unfinished buildings. Those staying in the local community still come to the collective sites during the day to access humanitarian assistance. The collective sites are overcrowded with thousands of people sheltering in buildings not fit for habitation and thousands more are sleeping outside on the muddy ground with only a sheet of tarpaulin to protect them from the cold and wet weather. Both situations raise major concerns from protection and health perspectives.

IOM operations focus on providing humanitarian assistance to displaced populations in collective sites and within host communities through an integrated approach, including core relief distributions, primary health care, shelter and water, sanitation and hygiene (WASH). Through site management support, IOM is facilitating the improvement of humanitarian service delivery, as well as the local authorities’ capacity to address protection concerns in displacement sites. In addition, IOM is supporting the overall humanitarian community’s response by monitoring population movements and needs through its Displacement Tracking Matrix (DTM).

In the past two weeks, IOM has distributed over 2,000 blankets and is currently transporting more items to the collective sites like blankets and emergency shelter kits, which include tarpaulin and rope, through a UK Department for International Development (DFID) in-kind donation. For those who are sheltering outside buildings, IOM has begun the construction of 40 communal shelters, of which four have been completed. IOM is also building communal kitchens for the displaced communities at collective sites: five of these have so far been completed.

With so many people sheltering in sites not prepared to host them, access to safe sanitation is another major worry. In just over two weeks, IOM has constructed more than 200 latrines of a planned total of 450. IOM is also promoting safe hygiene practices among the displaced population through the formation of committees, household visits, group sessions and information campaigns.

Health needs are also high but the capacity of local hospitals and clinics to address these needs is outweighed by the sheer number of people displaced in such a small area and short span of time. IOM plans to support local health infrastructure through staff and mobile health clinics.