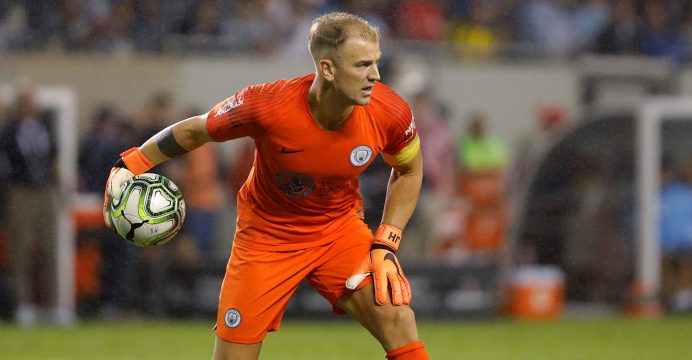 Joe Hart is desperate to leave Manchester City and reignite his career after being marginalised by Pep Guardiola.

The former England goalkeeper was axed by the Spaniard following his appointment two years ago and despite loan spells at Torino and West Ham United, the 31 year-old has failed to secure a permanent move away from the Etihad.

Hart made his first City appearance since August 2016 in the International Champions Cup 1-0 defeat to Borussia Dortmund at Soldier Field on Friday yet knows his future lies elsewhere.

On as a second-half substitute for Claudio Bravo, the man brought in by manager Guardiola to replace him, he looked assured and produced an excellent save midway through the second half.

Chelsea have been linked with a move if Thibaut Courtois departs for Real Madrid but with Hart in the final year of a contract believed to be worth around o160,000 per week, only a long-term deal at another club will suffice.

“I’ve never had such a long summer off so it’s just good to be playing football again,” said Hart who admitted he will sit out the final 12 months of his contract if he’s unable to find a suitable move.

“I’ve been away, enjoyed it as much as I could. I’ve been dealing with it the same way I deal with everything. I’m professional and I get on with things.

“My job is to play football. I’ve got other people trying to sort other things out for me in terms of a direction. I’m supposed to be here so this is where I put all my energy and time.

“I need to go somewhere permanent, I think that’s obvious. I did what I did in the previous two seasons because I needed to play to be involved in the World Cup.

“And look where that got me. I’ve played at the highest level for a long time and done a lot of things in the game. I need to be an important player at that club and I think that can only happen with a permanent move.

“I enjoyed being at both clubs (on loan) for different reasons. It’s an experience. I’m always going to be a fighter.

“That’s never going to change. I’ve got a year left and I’m not going on loan again because my situation has changed. I need to feel part of something.”

Hart’s troubles at City saw him lose his England place to Jordan Pickford and although he was delighted to see Gareth Southgate’s side upset the odds in Russia and reach the semi-finals, it wasn’t easy viewing.

“I just wanted the team to do well,” added Hart who still harbors hopes of an international return.

“I’ve got a lot of good relationships with the boys in the team and I thought Jordan Pickford had a good World Cup.

Another player who fell foul of Guardiola was Jadon Sancho, the Borussia Dortmund winger who left City for Germany last summer amid fears he wouldn’t play enough first team football.

Sancho impressed as a second-half substitute for a Dortmund side who ran out deserved winners.

“I had a point to prove,” said Sancho.