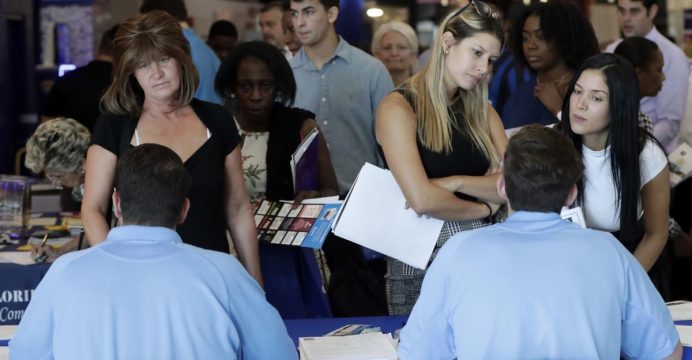 Global shares hit a two-week high on Monday as favorable U.S. jobs data whetted risk appetites, while sterling brushed off the resignation of two ministers over Britain’s departure from the European Union as traders focused on the likelihood of a “soft Brexit”.

The MSCI world equity index .MIWD00000PUS, which tracks shares in 47 countries, rose 0.4 percent, while the pan-European STOXX 600 index was up 0.6 percent, led by a strong rise across mining stocks.

The pound regained ground after an earlier wobble after news broke that Brexit Secretary David Davis and Minister Steven Baker had resigned in opposition to British Prime Minister Theresa May’s plan for leaving the EU.

The move came just two days after a meeting at May’s Chequers country residence supposedly sealed a cabinet deal on Brexit and underlines the deep divisions in her ruling Conservative Party over the departure from the EU.

“Sterling up and FTSE up does suggest that there’s a slight sigh of relief generally,” Ian Williams, economics & strategy research analyst at Peel Hunt, said.

“(The UK) is quite defensive, so in trade war times when industrials and tech are getting clobbered, that’s not so much of problem for the UK because those sectors are not as big in weighting terms as they are for the Euro zone or the U.S.,” added Williams.

“The combination of rising employment and increased labor force participation suggests healthy but not tightening labor market conditions in June, something that will allow the Fed to continue to hike rates at a gradual pace,” said Kevin Cummins, a senior U.S. economist at RBS.

MSCI’s broadest index of Asia-Pacific shares outside Japan .MIAPJ0000PUS climbed 1.3 percent, on top of 0.7 percent rally on Friday when the launch of U.S. tariffs on Chinese imports came and went without too many fireworks.

In currency markets, the U.S. dollar was mostly softer following the jobs report.

Global stocks were under pressure in June as uncertainty over trade dented risk appetite.

“Our central expectation is that these skirmishes do not escalate into a full trade war,” Karen Ward, chief market strategist for EMEA at J.P. Morgan Asset Management, said.

However, attention has shifted to the strong economic backdrop and the upcoming second-quarter earnings season.

Chinese shares managed to rally on Monday with the Shanghai blue chip index .CSI300 up 2.8 percent after hitting its lowest in almost 18 months last week.

China’s securities regulator said on Sunday it plans to ease restrictions on foreign investment in stock listed on the Shanghai or Shenzhen exchanges to attract more foreign capital and support the economy.

The focus this week would be on Chinese data for June covering inflation, new loans and international trade. The United States also releases inflation figures, while the Bank of Canada might well hike rates on Wednesday.