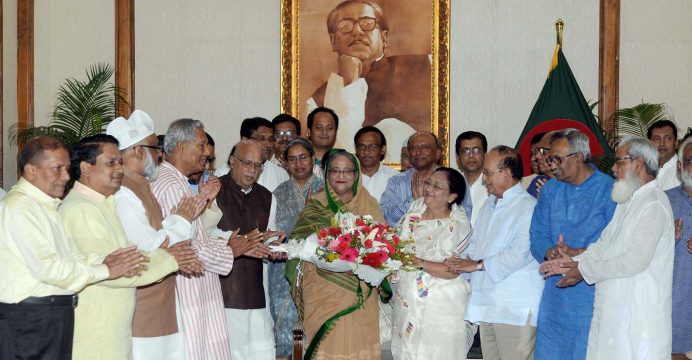 The ruling party is finally going to get a permanent party office. The ruling Awami League, the oldest political party in Bangladesh, will celebrate its 69th founding anniversary today.

In addition, the ruling party is finally going to get a permanent party office.

The Awami League has chalked out elaborate programs to observe the day, including the hoisting of the national and party flags atop its offices across the country.

At 9am, wreaths will be laid at the portrait of Bangabandhu Sheikh Mujibur Rahman at the Bangabandhu Memorial Museum in Dhanmondi, Dhaka, as well as at his grave in Tungipara, Gopalganj.

At 10am, Prime Minister Sheikh Hasina will inaugurate the newly built Awami League party office at 23 Bangabandhu Avenue in Gulistan.

Later, a special meeting will be held at Ganabhaban at around 11am, where the president, secretaries and lawmakers from all city, district, upazila, and municipality units of Awami League will be present. Prime Minister Sheikh Hasina will be in the chair and will inform the party leaders on the party’s future plans, including those for the next general election and upcoming city elections.

At a briefing on Friday morning, Awami League General Secretary and Road Transport and Bridges Minister Obaidul Quader urged leaders and activists of the party and its associate bodies to “observe the day in a befitting manner”.

The Awami League has played a key role in major democratic movements of the nation, from the Language Movement of 1952 to the Liberation War of 1971.

Father of the Nation Bangabandhu Sheikh Mujibur Rahman, who led the party during the Liberation War, and almost all of his family members were assassinated in August 1975, causing the Awami League to lose state power. His eldest daughter, the current Awami League President and Prime Minister Sheikh Hasina, was not in the country at the time.

Sheikh Hasina, who had been in exile since the assassination of her father, was elected as the president of Awami League upon her return to the country in 1981.