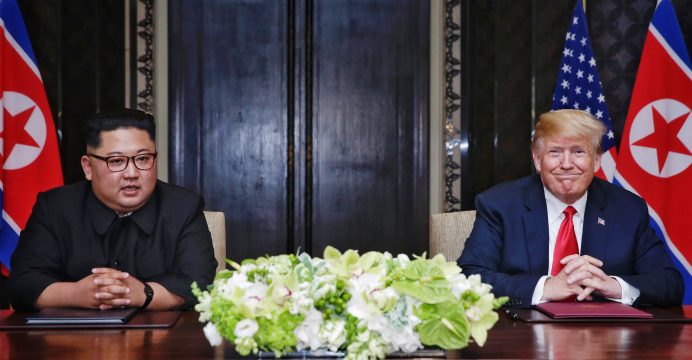 North Korea no longer poses a nuclear threat, nor is it the “biggest and most dangerous problem” for the United States, President Donald Trump said on Wednesday on his return from a summit in Singapore with North Korean leader Kim Jong Un.

The summit was the first between a sitting U.S. president and a North Korean leader and followed a flurry of North Korean nuclear and missile tests and angry exchanges between Trump and Kim last year that fueled fears of war.

“Everybody can now feel much safer than the day I took office,” Trump said on Twitter.

“There is no longer a nuclear threat from North Korea. Meeting with Kim Jong Un was an interesting and very positive experience. North Korea has great potential for the future!”

On Tuesday, Trump told a news conference after the summit that he would like to lift sanctions against the North but that this would not happen immediately.

North Korean state media lauded the summit as a resounding success, saying Trump expressed his intention to halt U.S.-South Korea military exercises, offer security guarantees to the North and lift sanctions against it as relations improve.

Kim and Trump invited each other to their respective countries and both leaders “gladly accepted,” the North’s Korean Central News Agency (KCNA) said.

“Kim Jong Un and Trump had the shared recognition to the effect that it is important to abide by the principle of step-by-step and simultaneous action in achieving peace, stability and denuclearization of the Korean Peninsula,” KCNA said.

“We save a fortune by not doing war games, as long as we are negotiating in good faith – which both sides are!” he said on Twitter.

“It’s not a burden onto the American taxpayer to have a forward deployed force in South Korea,” Graham told CNN.

“It brings stability. It’s a warning to China that you can’t just take over the whole region. So I reject that analysis that it costs too much, but I do accept the proposition, let’s stand down (on military exercises) and see if we can find a better way here.”

Speaking in Beijing, Chinese Foreign Ministry spokesman Geng Shuang said he hoped all parties could “grasp the moment of positive changes” on the peninsula to take constructive steps toward a political resolution and promoting denuclearization.

“At this time, everyone had seen that North Korea has halted missile and nuclear tests, and the United States and South Korea have to an extent restricted their military actions. This has de facto realized China’s dual suspension proposal,” he told a daily news briefing.

“When it comes to Trump’s statement yesterday that he would halt South Korea and the United States’ military drills, I can only say that China’s proposal is indeed practical and reasonable, is in line with all sides’ interests and can resolve all sides’ concerns.”